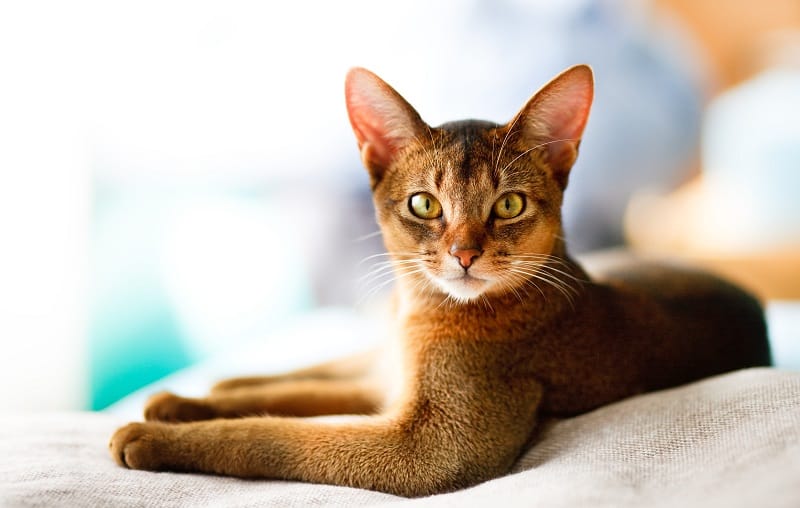 If you are thinking of getting a new cat, you may have considered an Abyssinian cat. These are really beautiful cats that will give any other cat a run for its money in terms of energy and playfulness.

These cats absolutely love to chew and scratch on stuff. Either way, let’s take a closer look at these cats to see what they are all about.

The nature of the Aby is a super adventurous, playful, and destructive one. These cats never sit still; they love to hunt animals, play with toys, and explore new places.

Here’s a short clip about Abyssinian and what you need to know about it:

These cats are said to be super smart and highly inquisitive, and thus they will get their claws into anything and everything. They love heights as well and they love to jump up trees, window sills, refrigerators and everything in between.

This is a high-paced cat with more energy than most people have. 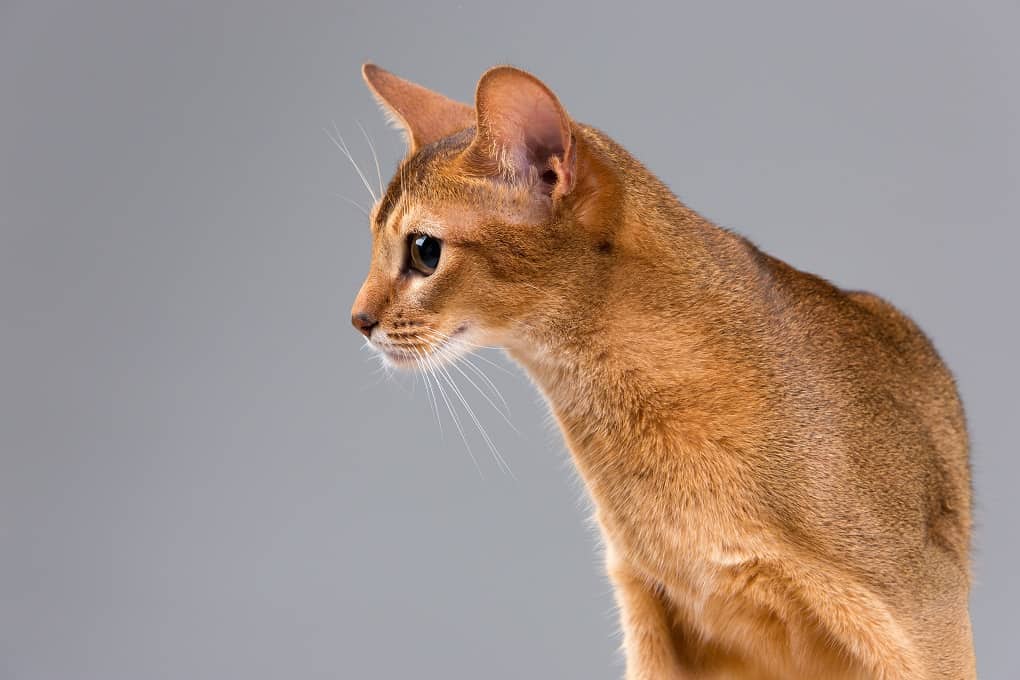 The origins of the Aby are somewhat unknown. Based on genetic tests, it is assumed that this cat originally comes from near the Indian Ocean and Southeastern Asia.

It is possible that this cat was brought to England from India, or the Indonesian Islands by British or Dutch traders. The first mention of this breed in print is in 1872 in an issue of Harper’s weekly.

To be fair, there are no records of origin for the Aby, only pure speculation. The first Abyssinians were introduced to the US around 1900, with the first breeding program in the US being started at around 1930.

It’s lucky that this cat made it to the States when it did, because across the rest of the world, this cat breed was devastated by WWII.

One thing which you need to know about the Aby is that it is widely known for having multiple health issues. They tend to be fairly healthy when young, but as they age, they are susceptible to a multitude of health issues such as early-onset periodontal disease; they have various kidney diseases which they are susceptible to, and are also known for developing degenerative eye diseases.

Besides that, the Aby is also known for its tendency to develop hyperesthesia syndrome, which is a serious neurological issue, as well as patellar luxation, which is a hereditary dislocation of the kneecap.

As you can see, if you get an Aby, you need to be prepared to spend on medical bills, as they have a vast array of health issues which they may suffer as they age.

Luckily for Aby owners, these cats don’t require all that much in terms of grooming. They have relatively short fur and don’t shed too badly.

However, with that said, brushing once per week is recommended, just to remove dead hair and skin. They should never develop fur matts because the hair is short, but it does happen sometimes.

Moreover, you want to bathe your Aby no more than twice per year, as it is not good for their coats. To help stave off early onset periodontal disease, you do want to brush their teeth at least twice per week, if not more.

You will also want to groom or cut their claws accordingly, as well as clean out their ears with cotton balls about once per week.

Abyssinians are not overly large cats. They are medium in build, tend to be relatively slender, have long tails, and really big and pointy ears.

They make for a good medium-size house cat. The males and females tend to be about the same size, with their shoulders topping out at around 10 inches in height, sometimes as little as 8 inches.

As you can see, they are not the largest domestic cat breed.

The Aby is not a very heavy cat either. It’s slender and sleek build usually never weighs more than 12 pounds. A fully grown Abyssinian can weigh as little as 6 pounds, with the average weight being anywhere between 8 and 10 pounds.

The Aby is one of the most active, energetic, and hyper cats around. They love to spend all day running around and exploring.

They absolutely love to get their claws, as well as their teeth, into everything. They love to chew and scratch things apart, so if you don’t want them messing with your furniture and belongings, you’d better get them toys and scratch posts to keep them occupied.

These cats also love to play with people. In terms of activeness, they are perhaps one of the most hyperactive cats around.

Although Abys are not 100% hypoallergenic, cats like this are shown to have lower levels of Fel d 1, which is a main allergen that causes outbreaks or reactions in people with cat allergies.

This is not 100% proven, but there is strong evidence to support it. However, as we mentioned before, they are still known to cause reactions in some.

The average lifespan of this cat is around 12 to 13 years. Some of them have been known to get as old as 15 or 16 years of age, but that is pushing it.

Due to the many health issues which these cats can suffer from, their average lifespan is significantly shorter than that of many other cat breeds.

The Aby is quite difficult to care for. While they do not require too much grooming, their high level of activity and propensity to tear apart anything they can get their claws on does require a certain degree of dedication.

Where to get a Abyssinian Cat

These cats are fairly rare, but there are breeders across the world. The bottom line is that if you want to be sure of what you are getting, you need to go to a certified breeder, one that will provide you with all of the proper papers.

You might find them online or in animals shelters on occasion.

How much does a Abyssinian Cat cost?

Your average Aby is going to run you anywhere from $900 to $1,200 for a kitten. However, kittens coming from distinguished lines and award winners may run you up to $2,000.

Choosing the right type of Abyssinian 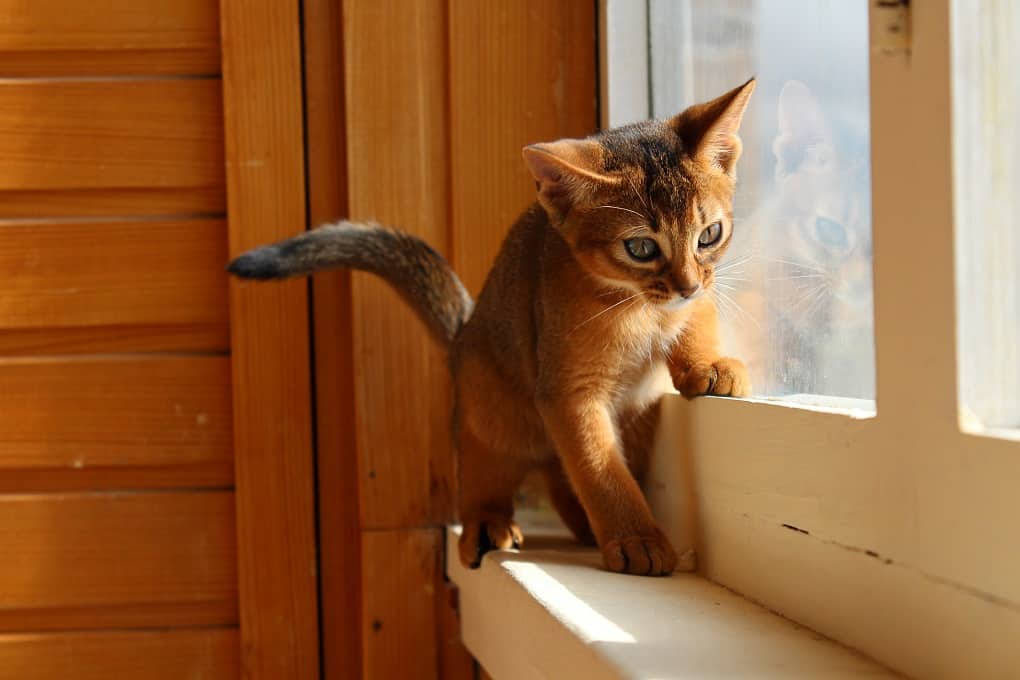 When choosing an Abyssinian, you would be wise to inquire into the specific genetic line of the kittens and their parents. Seeing as these cats can suffer from a number of health issues, finding a cat that has relatively healthy ancestors is the main thing to look for.

Responsibilities to consider in the care of a Abyssinian Cat

Abys really do not require all that much. You need to groom them once per week, clip their nails on occasion, clean their ears regularly, and provide them with a proper diet.

Other than that, you want to get them scratching posts and toys so they don’t shred your home.

They do love to play, but they are not overly affectionate and are certainly not lap cats. Keep in mind that if you don’t keep them busy, they will find a way to do it themselves. 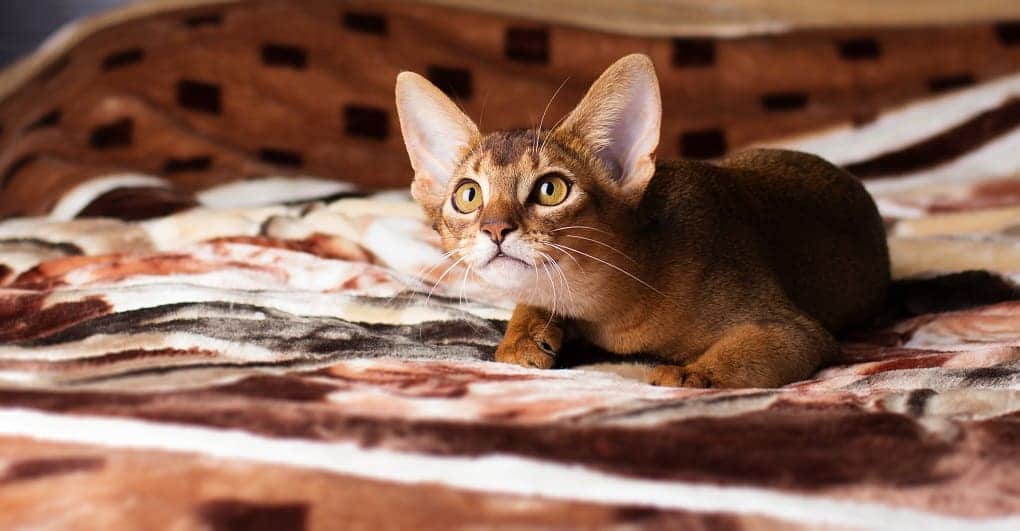 These cats are energetic, smart, inquisitive, and always on the move. Whether they are chasing a mouse, scratching a post, or jumping on top of the fridge to see what is going on, these cats never sit still.

They love to play but hate being picked up or sitting in laps.

Abys can come in a variety of colors, but no matter the color, they tend to have a lighter stomach and neck, with a dark top of the tail and a dark back, with their legs sitting about in the middle in terms of darkness.

Yes, Abys are fairly friendly towards kids and dogs. However, they have been known to get a little frustrated when animals or young children continuously bother them.

Abys are known for being some very smart and inquisitive cats. They are great problem solvers and have been known to often trick their owners in various ways. These cats are relatively intelligent as far as cats go.

As mentioned several times now, in terms of energy, these are non-stop cats. Have you seen the Energizer bunny? You know, that bunny in the battery commercials that never dies and pounds on the drums all day long. That is the Abby

Besides regular grooming, a good diet, some nail clipping, and the provision of toys and items to rip to shreds, there is not too much in terms of maintenance.

In terms of different types of Abyssinians, technically there is only this one breed or type. However, they can come in a variety of colors.

They usually all have the same pattern which we talked about above, but they can come in red, blue, fawn, a cinnamon color, and ruddy as well.

The bottom line is that the Aby is a very high-energy cat that needs a fair amount of attention, and if you don’t give it to them, they will most likely rip your home to shreds.

It is a very energetic and playful cat that will never have you bored or short on anything to keep you busy. These cats are friendly and can be slightly affectionate, but not overly so.

They aren’t too hard to maintain and don’t need too much grooming either. They are certainly both smart and good looking.