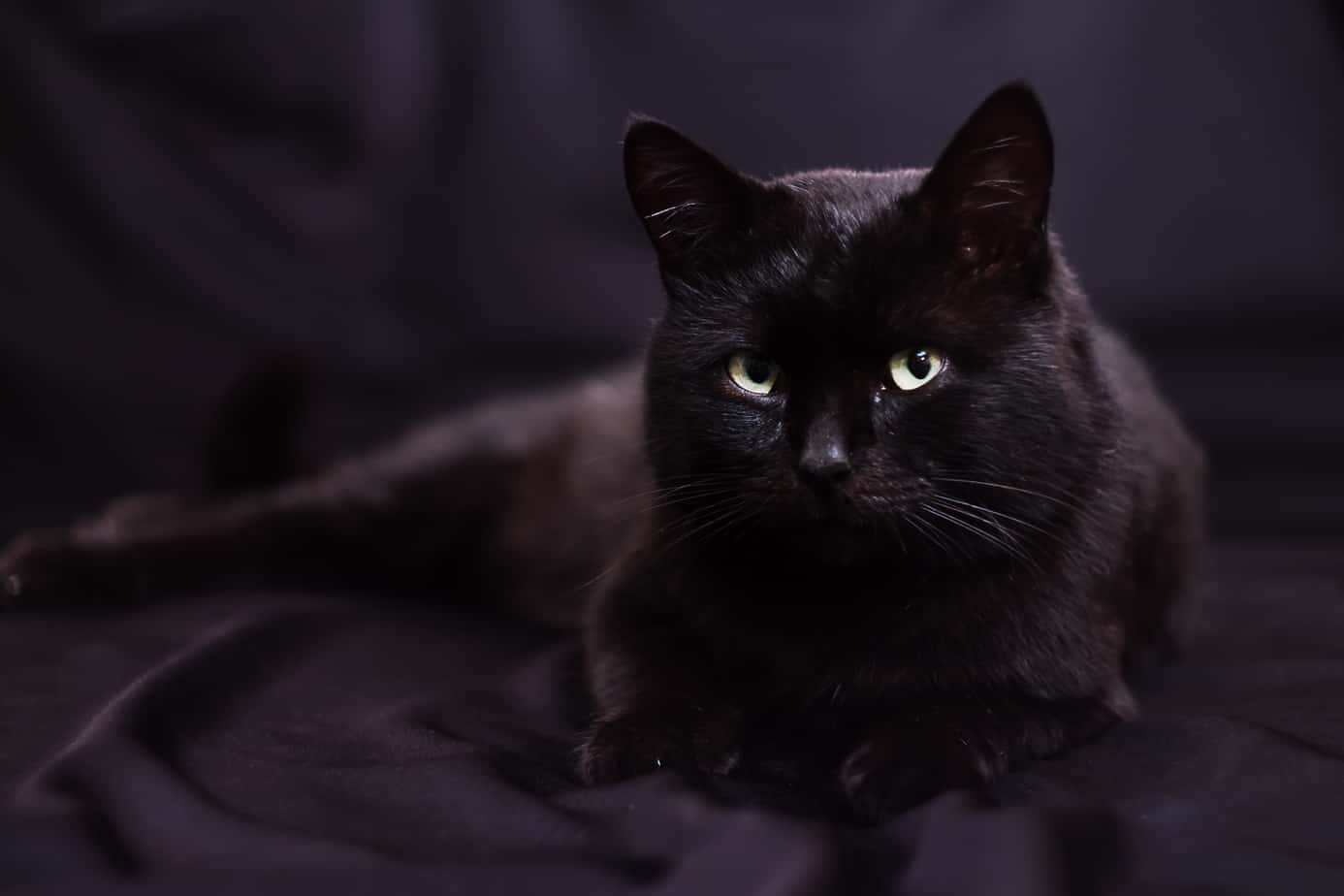 It’s a sad fact that many black cats never get adopted from shelters, especially when they are some of the most beautiful cats you will ever see. When many people see a black cat, they are automatically superstitious, and think that the cat is going to bring bad luck.

In days past, black cats were associated with witches, and were said to be evil. But think about this. In North America, the superstition is that it is bad luck to have a black cat cross your path. In the UK, it is good luck. Now, doesn’t that just tell you that superstitions, at least this one, are a bunch of bunk?

If you are planning on adopting a black cat, congratulations. You are not only giving a shelter cat a fabulous home where it will be loved and cared for, but you are also bringing a sleek and gorgeous best friend into your life. You may be wondering what you should name your new furry friend. May we suggest that you take a look at some of the names on the following list?

Each has a description, and one may be the ideal name to suit the personality of your new pet. Many of these names are associated with the dark, including witchcraft, but they are still pretty cool names. 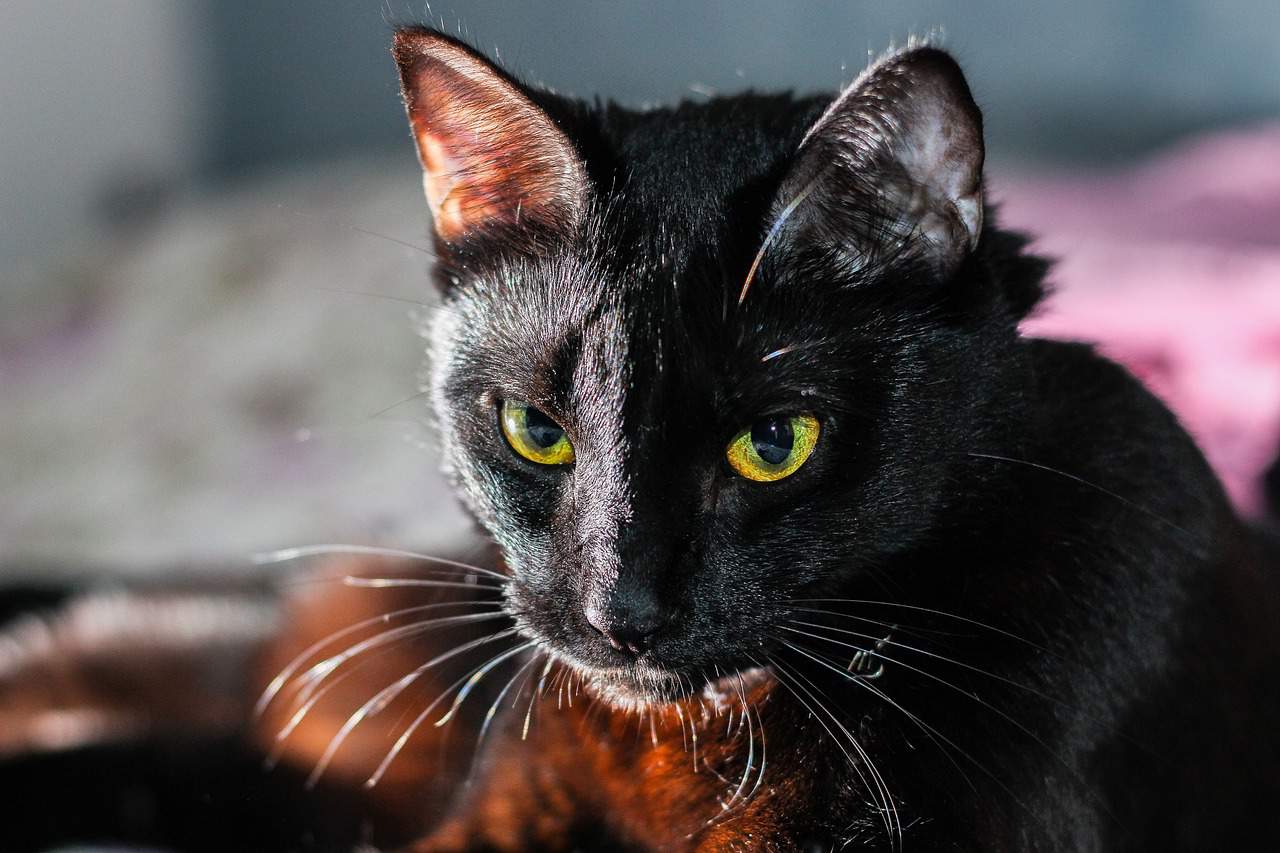 For the longest period of time, black cats were seen as tokens of all types of luck and despite this, they still bring joy to their owners. The most prominent black cat, black cat names and history we all know of is probably from TV Cartoons named Felix. Not only did he garner a huge fan-base, but he was also one of the earliest cartoon characters to appeal to a universal audience. Historically, most black cats have been seen as bad luck, but our dear Felix only possessed the goods for besting even the most undesirable situations.Luckily, not all black cats have been thought of in such a negative way. Many cultures in history have considered black cats as a godsend.

Many are aware that Egyptians are well-known for worshiping cats. One such example was the goddess Bastet, who stood as a symbol of both honesty and prosperity. In images, we see her as a being with a female human body and bearing a cat’s head. Most often, the coloring of the cat is black. In their efforts to please this goddess, many Egyptian households cared for their own black cats.

Those who are familiar with mythology in this area will be aware of the trickery that can come from fairy folk. One of these tricky fairies came in the form of a fairy in the body of a large, black cat. Known as Cat Sith, this black cat bore a single white spot which helped to tell it apart from others. It’s from beings like Cat Sith that the thoughts of bad luck came to be. While many believed it was a fairy, there are also some who thought it was a witch trapped in the body of a cat instead.

During the early ages of America, as it was still being settled, rumors of witches came into being. However, not only did people fear the witches themselves, but also their familiars. If you don’t know, familiars are generally animal sidekicks to witches that help to do their bidding. One such familiar was the black cat, which sometimes included witches taking on the form of the animal themselves.

Because of this, many began to fear black cats and their ability to roam the night without being seen. As people became more suspicious, such stories about these poor creatures only grew.

Meanwhile, there were similar fears about black cats going on in European countries. As a result, many would kill off black cats out of fear that they were something evil in disguise. Some also thought that this also played into the increase of rats and disease that spread around that time.

Below are some of the cutest, funnies and adorable black cat names for your cat: 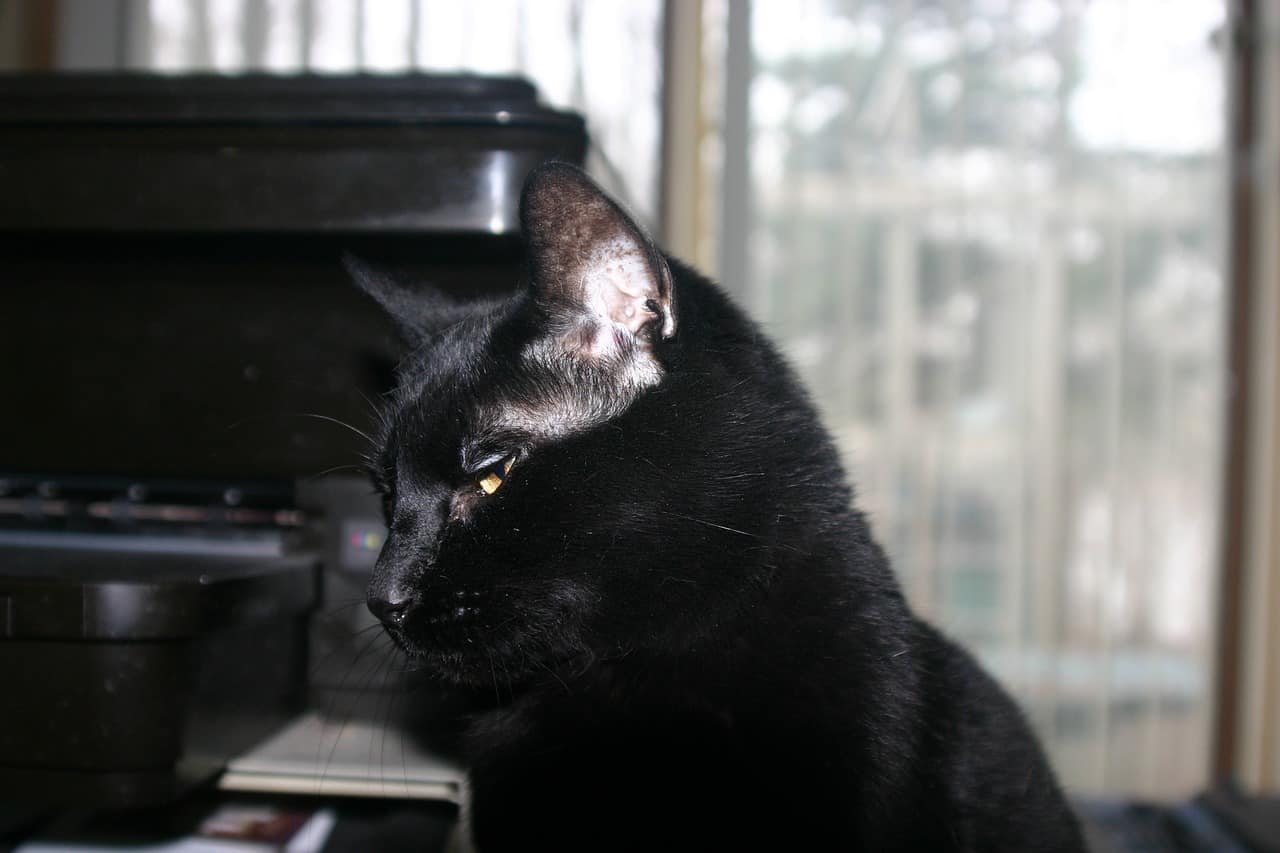 This rather common breed was once nicknamed the “panther for your parlor.” The Bombay is a hybrid of the black American Shorthair and a Sable Burmese and originated in 1953. The Bombay achieved acceptance into the Cat Fancier Association’s (CFA) championship class in 1976. 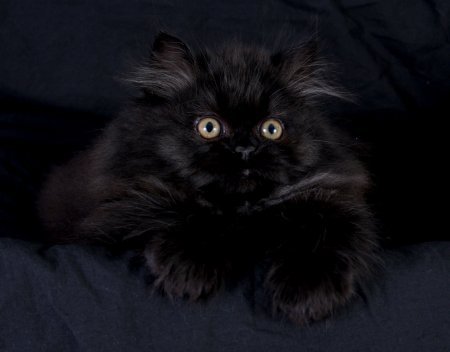 One of the CFA’s most popular breeds, the black coat of the Persian cat is sleek, shiny and soft. This short-legged sweetheart commands attention and happily reciprocates with equal amounts of love. 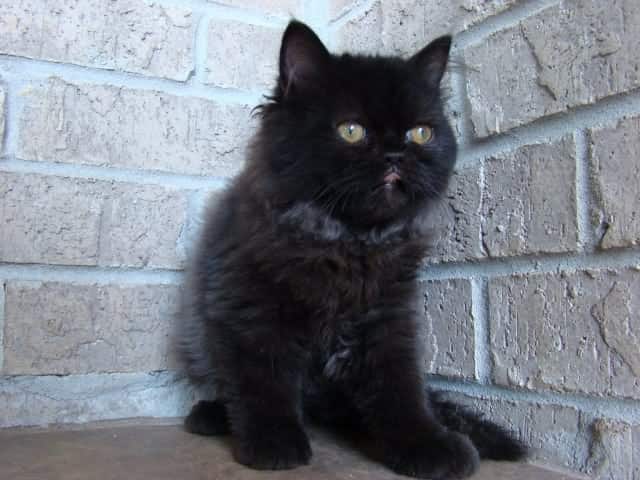 Typically with large, expressive eyes and a coat as soft as silk, the show-stopping Ragamuffin is a calm, patient cat who’s more than eager to please. They are usually heavily boned, medium-sized cats with coats that do not mat, which is a definite standout feature of the cat. 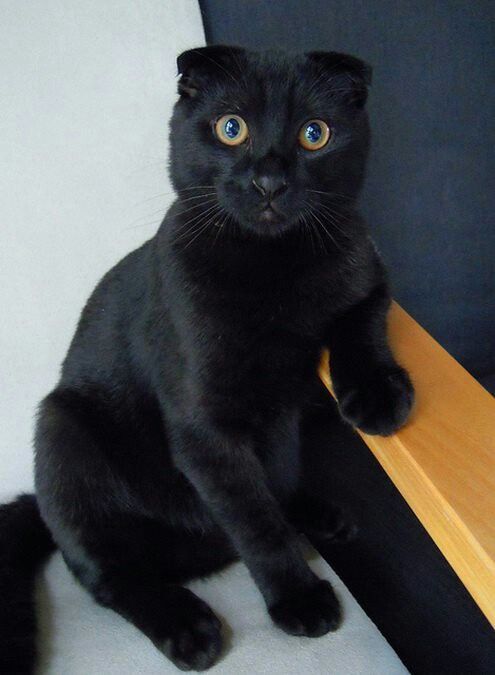 Their impish ears give the Scottish Fold a look of mischief. The cat is also known for a cute voice that sharply contrasts to their sturdy, rounded body. This hardy breed is born with straight ears that usually start ‘folding’ at three to four weeks of age. 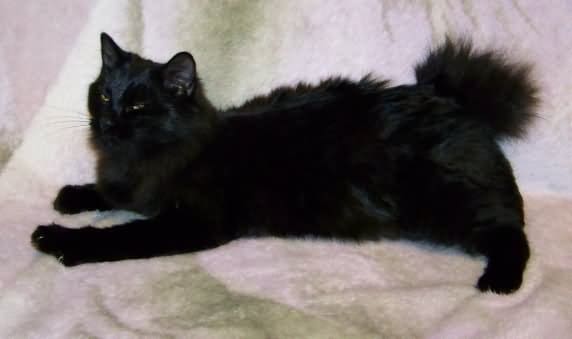 While this cat might have the appearance of a wild animal, their affectionate nature and intelligence will instantly change your views. American Bobtails are active and enjoy playtime. They are strongly devoted to their humans and remain loyal in their expressive nature.

You might also want to check out cute, adorable and appropriate orange cat names here.

If your cat is female, this is a great name, especially if she has a mean face. Grimalkin was a very mean looking female cat, and was associated with witchcraft in the middle ages. If someone were to possess a Grimalkin, it was proof that they practiced witchcraft and led to being burned at the stake.

Pronounced “grim-war,” this is the name given to a book of magic spells used by magicians and witches. Spells included creating magical objects, summoning the spirits, placing curses or charms on people, etc. You may already know about one famous Grimoire, “The Book of Shadows.”

This is an adorable name for any cat. An imp is a character from German folklore, a small goblin that was said to be very mischievous. How perfect is that for a cat, especially when cats are known for their mischievous nature? But, imps love friends, and they seek friendship, which is exactly what your shelter cat will need.

A black cat with sleek-looking fur would be proud to be called Raven. In folklore, ravens are said to be cunning and sneaky, which is the same personality we see in a lot of cats. Plus, ravens, like cats, are highly intelligent animals that can and do respond positively to interaction with humans.

This is a different word for black, and it is a very nice name for a pet, particularly a black cat. If you are bringing home a male cat and feel that this name is too “girly” for your boy, shorten the name to “Ebon.” It sounds cool, and you can be guaranteed that no one else you know is going to have a pet with the same name.

Here is an interesting and cute name for a black female cat. The Black Magic Hollyhock is a gorgeous black flower, and it is a great name for a black cat, especially if she is very fluffy. A luxurious looking cat deserves a beautiful and luxurious name, and Hollyhock fits the bill quite nicely.

Onyx is a beautiful, shiny, black gemstone, and it is also a wonderful name for a black cat. The best part about this name is that it can work for both female and male cats. This would be the ideal name for a short-haired, black cat that has shiny, sleek fur that shines just like the onyx gemstone.

If you are an artist, you may like this name for your black cat. After all, you work with ink and other mediums, and black fur can be very inky looking. In fact, you could even call your cat “Inky,” which is not only an apt name for a black cat, but also a very cute one, and good for males or females.

Star Wars fans may love having a black cat named Vader. Of course, this is a name that is probably best for a male cat, since Darth Vader is a male. A lot of people jokingly say that cats are planning on taking over the world someday. Vader wanted to do the same thing, so what better name could you give to your cat?

For more black cat names appropriate for your cat, check the video below:

These are just a few of the cool names you can give to your new black cat. Another option is to combine some of these names to come up with something that is really creative, and truly unique to your furry friend.