Home - Training - How to Get a Cat to Like a Dog 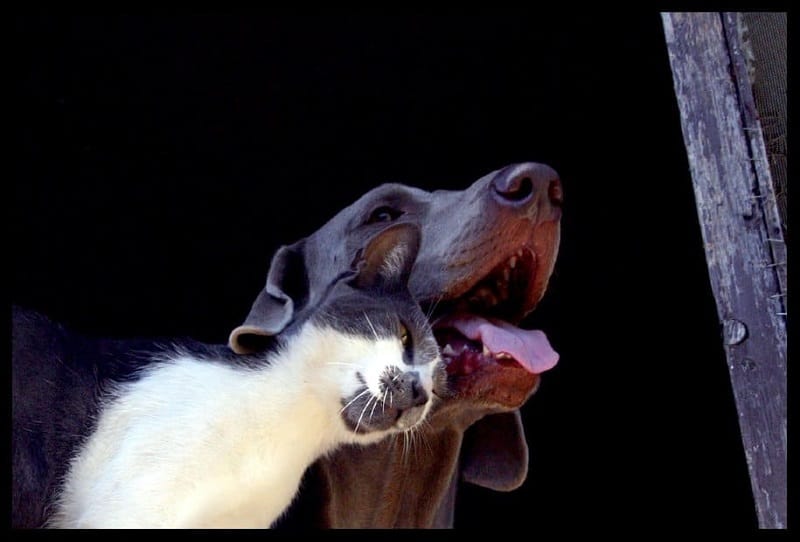 Many people may not think too much about how they should introduce new pets into their home. Unfortunately, this can result in pets becoming stressed and overwhelmed, which can also contribute to them not getting along very well. Luckily, there are ways to avoid this. There are some ways of how to get a cat to like a dog.

There are a few steps that you’ll need to follow when you bring a new cat or dog into a home that already has a pet. While they might require a lot of patience, these steps can ensure that your cat and dog get along better overall, resulting in fewer problems living together. 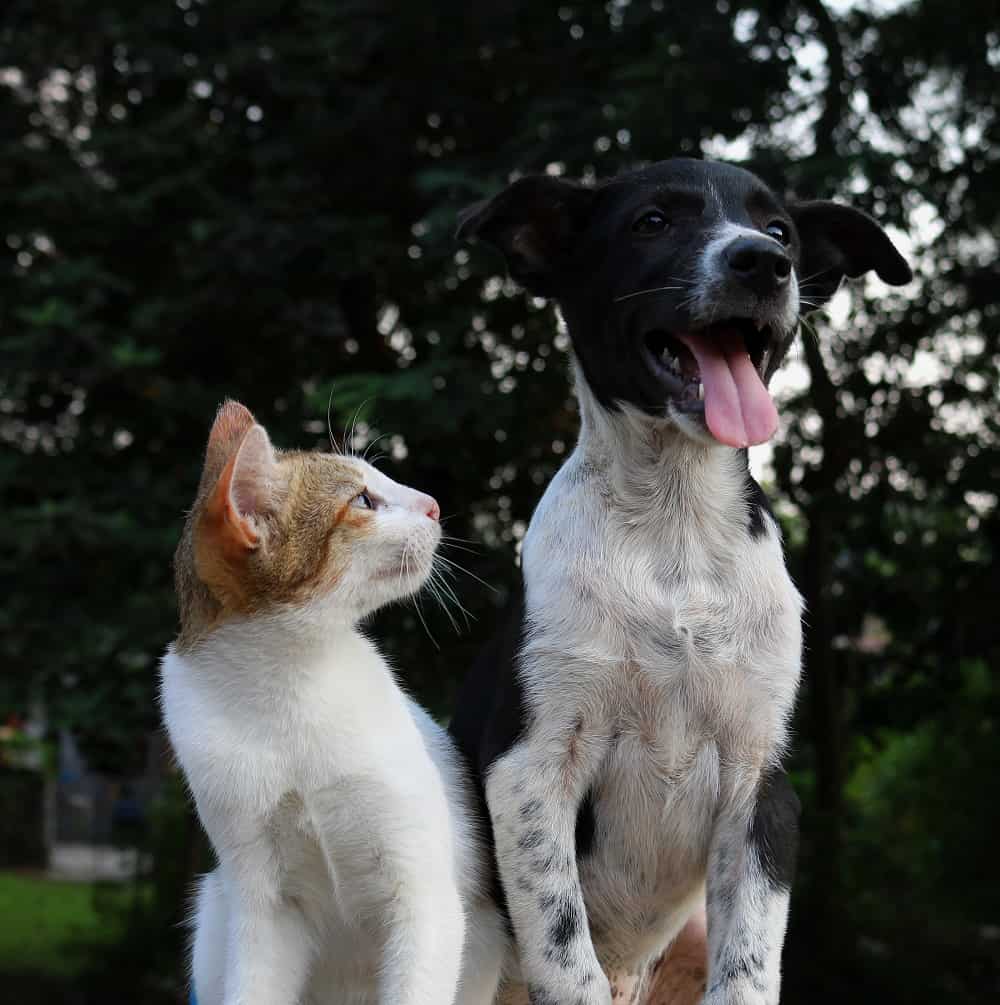 The first step is making the introduction between your pets. This is a very important step, and it’s important to handle it very carefully in order to get the best results. For this step, you’ll need to be prepared to remove one or both pets from the situation if there should be any signs of aggression.

For example, if you’re introducing a new kitten then you’ll want to be holding the kitten. It also wouldn’t hurt to have your dog on a leash, just in case. It’s best to keep the first introduction as smooth as possible, allowing pets to see each other without necessarily interacting just yet.

A lot of the time, pets may have some trouble adjusting to one another if they are forced into a space together too quickly. While some pets may get along right away, it’s always better to be cautious in order to avoid issues. This can include keeping pets away from each other for the most part.

If you can allocate the new pet to one room then this can be helpful for allowing them to get used to their space without too much stress. It’s wise to keep in mind that the new pet is in a whole new space, with new people and animals. As a result, it’s good to give them some time to get used to your home.

Let Them Adjust to Smells 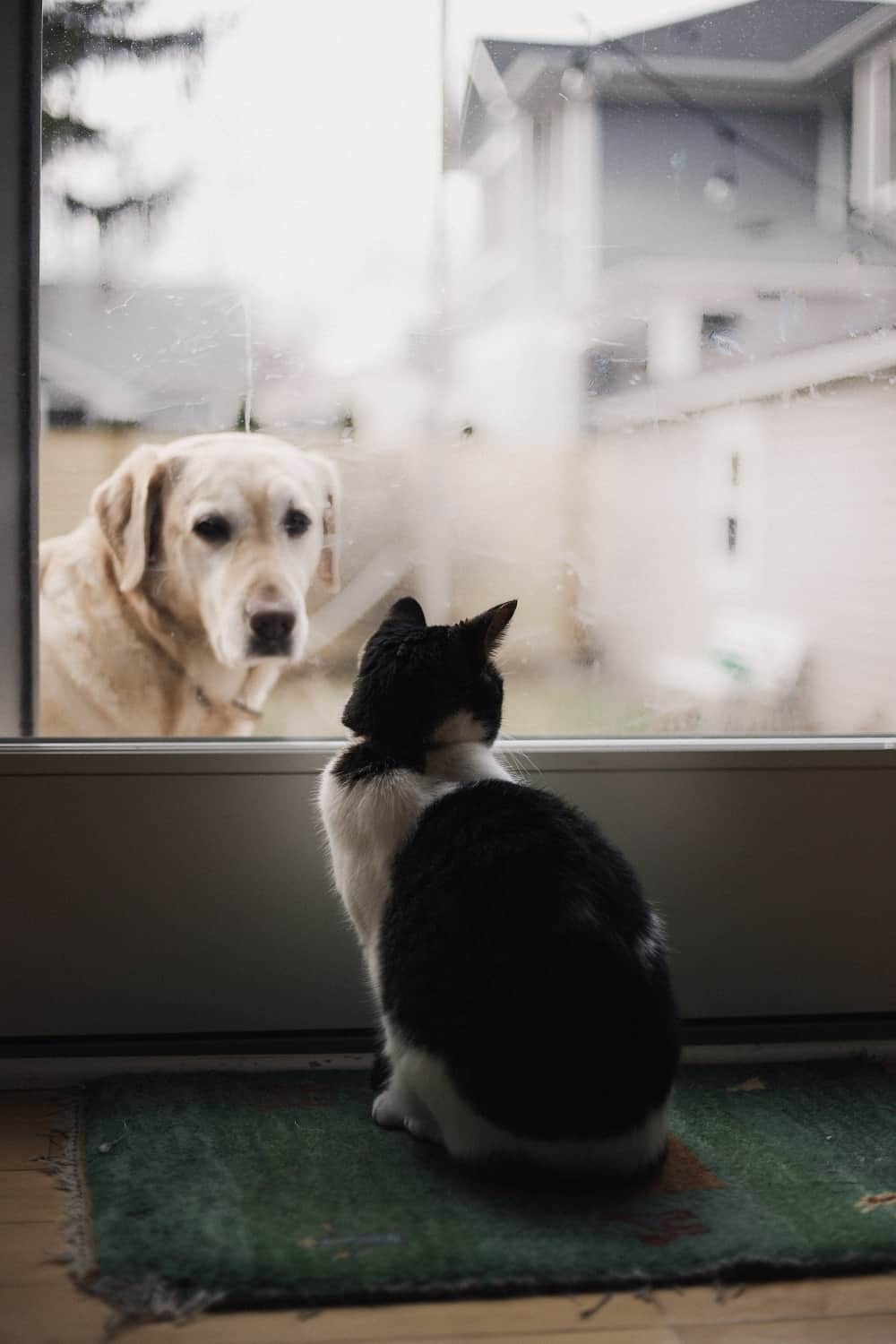 Another option is to keep both pets confined to their own rooms for the most part. After a few days, you can then switch the rooms that the pets are in. This way, they can get used to each other’s scents without too much stressful interaction.

While this may not seem like a big deal to you, allowing your pets to get used to each other’s smells can be very helpful for increasing the comfort level overall. As a result, they may be more likely to like each other once they are ready to interact, or at the very least won’t have much interest one way or the other.

Start by letting your pets sniff one another while still in a divided space. Something like a baby gate or a type of door that will allow them a small amount of interaction is a good idea. This way, they can check each other out without risking a fight or flight situation.

Here is a short funny video about dogs and cats spending some time together:

In most cases, the cat will be more likely to be afraid of the dog. Because of this, it’s a good idea to make sure that the cat seems comfortable before allowing them to interact further. Next, you can try letting them interact more closely while keeping a close eye on them. 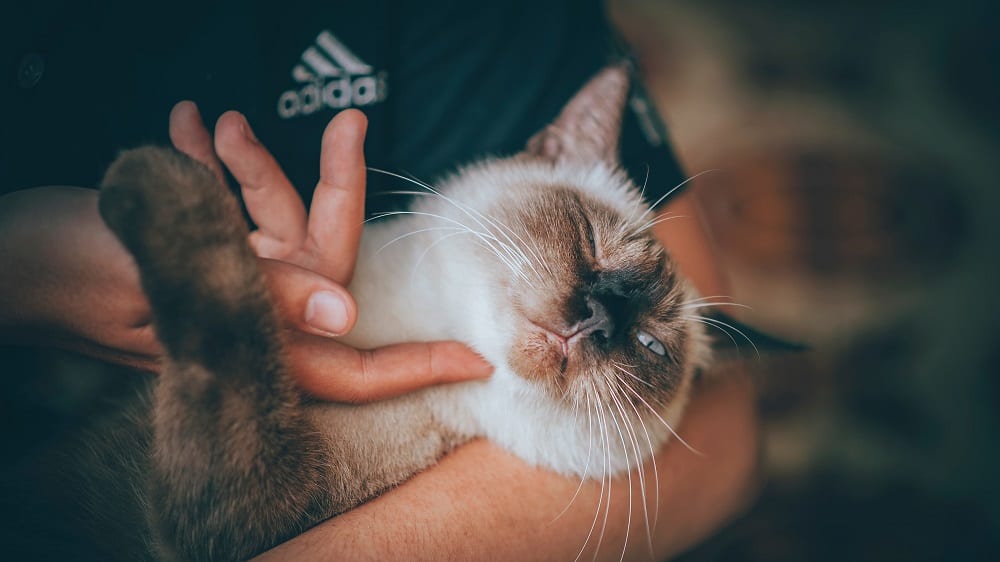 It can be tempting to give a lot of love to your new pet. After all, a new critter is exciting. Love your pet as much as you can. However, it’s important to make sure your affection is shared, if not equally, at least bearable and unnoticeable between your two pets. This can help both animals to continue feeling loved, leading to fewer problems with jealousy.

Think of it as being similar to having a new baby. You want to make sure both children feel that they are getting the love and attention they need. The same is true for pets! It is possible for one pet to get jealous if the other is receiving more attention, which can potentially lead to problems.

Early on, pets may be more worn down while interacting with one another than they will once they’re completely comfortable. This is especially true if you have a dog who is excited about a new cat or kitten. While the dog might be having fun, the cat might get stressed out by the attempts to play.

After a while, this interaction can get stressful, so it’s worthwhile to make sure your pets get breaks from one another, during which they can calm down and relax. In time, the novelty of the new pet will wear off and it’s likely they’ll be able to relax around one another more easily.

Keep An Eye Out

Even after your pets appear to have gotten used to one another, there can sometimes be interactions that one or both pets don’t enjoy, resulting in a squabble or one pet becoming frightened. Because of this, you’ll want to keep an eye on your pets to make sure they’re getting along well.

This problem is more likely to occur early on, but you never know when something might irritate one of them. As a result, it’s a good idea to make sure that you can easily remove one or both animals from the room just in case, though it’s most likely that they’ll be fine once they get used to each other.

If you stay patient and take your time, it’s far more likely that your pets will be able to get comfortable and even enjoy playing together. It’s just a matter of giving them the time and making slow steps in introducing them. If you have pets that already know one another but don’t get along, these steps can also help to introduce them in a healthier way.

Previous Post: « How to Introduce Cat to Dog
Next Post: Tabby Cats: The Ultimate Guide to their history, types, characteristics, temperament, and care »