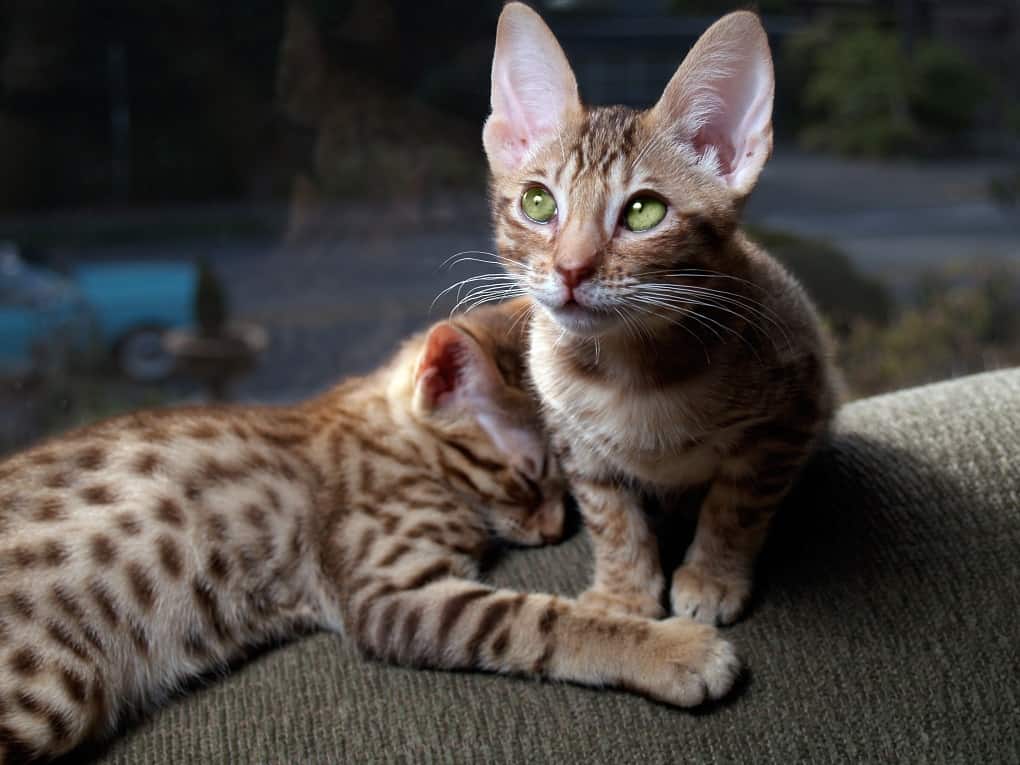 In terms of the nature of this cat, it is smart, curious, inquisitive, and prone to trouble. It is a very sociable and friendly cat. It loves being around its owners, following you around the house, and will often hitch a ride on your shoulders. The Ocicat has a super playful nature, and they will either play with or destroy literally everything that they can get their furry little paws on.

Learn more about Ocicat in the short video below:

These are fairly vocal cats and will let you know when they are happy, and this goes double if they are not having fun. The Ocicat is also known for being very intelligent, as it will always have a go at puzzle toys and challenges. These are not loner cats and they absolutely do not enjoy being left alone.

Breeders were attempting to achieve a specific look when breeding Siamese and Abyssinian cats back in the 1960s, and the result was the precursor to the Ocicat. The final stages involved being mixed with American shorthairs to create the Ocicat cat breed which we know today. This cat was recognized in 1987 by the Cat Fanciers Association. 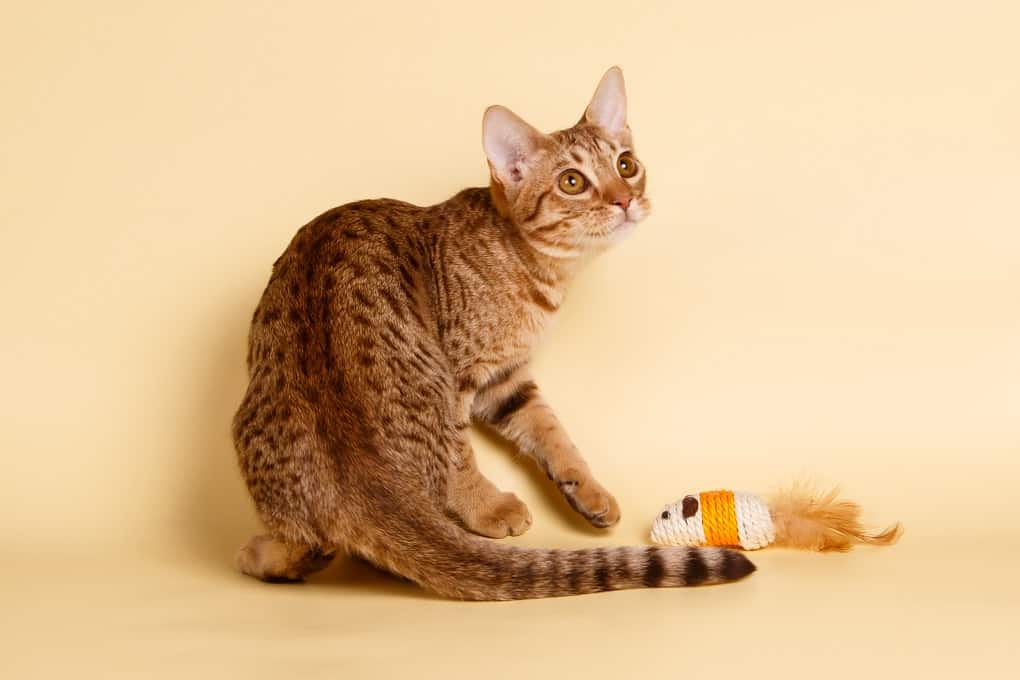 Generally speaking, the Ocicat is a fairly healthy type of cat and can be fairly long-lived. There are only a couple of health issues which they are known to suffer from. One of these issues is retinal atrophy, which in worst case scenarios can lead to blindness at a moderately young age.

The Ocicat may also develop hypertrophic cardiomyopathy, which is a common form of heart disease in cats, although this is not proven to be genetic. Siamese and Abyssinian cats have been known to develop renal and liver issues, as well as periodontal disease, traits which some Ocicats have inherited, although instances of these issues are fairly few and far in between.

The Ocicat really does not require much in the ways of grooming. You should use a small and fairly soft brush to brush them about once per week to remove dead hair from their coats. Unless they get very dirty or smelly, giving them baths is not usually recommended, as it is not great for their coats.

The Ocicat tends to be a fairly long, lean, and muscular cat, although not overly large, they are also not stocky or wide. They are quite elegant if we do say so ourselves. In terms of height at the shoulders, your larger males will top out at around 11 inches, with smaller specimen and females usually topping out at 9 or 10 inches at the shoulders.

One thing to keep in mind about the Ocicat is that it can wildly vary in terms of weight. Some larger ones are known to reach up to 15 pounds, which is quite substantial for a pet cat.

On the other hands, there are smaller ones, especially some females, which can weigh as little as 6 pounds. So, when you get an Ocicat, be aware that its weight may differ by as much as 9 or 10 pounds when compared to other cats of the same breed.

The Ocicat is a highly active cat. If the scale goes from 1 to 10, the Ocicat is an 11 in terms of activity. They are very vocal and will tell you when they want something. They do not want to be left alone, they will follow you around the house, and as far as they are concerned, anything that they can get their claws on is fair game to be chewed and clawed apart.

Technically speaking, the Ocicat is not hypoallergenic. However, their moderate size and easy-to-groom coats means that they are not overly prone to causing allergic reactions, but they have been known to do so in people with severe cat allergies. Regular brushing will help cut down on this.

The Ocicat has a moderate lifespan, with specimens that are healthy and well cared for being able to make it to 15 or 16 years of age. On the other hand, they have also been known to live for as little as 9 or 10 years, with the median being around 12 years of age.

The Ocicat does not require much in terms of grooming, but if you value your furniture and belongings, then we would have to say that the Ocicat is hard to care for.

As mentioned before, anything in the home they will consider to be their own and is fair game to be played with, which usually involves it being torn to shreds. You just have to make sure to put anything away which you don’t want them getting their paws on.

Where to get a Ocicat

As is the case whenever you are looking for a purebred cat, it is highly recommended that you seek a reputable breeder. This is not an overly rare cat, so you should be able to find breeders relatively close to home.

How much does a Ocicat cost?

Ocicats are not all that rare, and therefore they also do not cost that much, at least not when compared to other purebred cats. You can usually find one of these felines for about $600, with ones from distinguished lines going for as much as $1,000, which is still not all that much in for a pedigree.

Choosing the right type of Ocicat 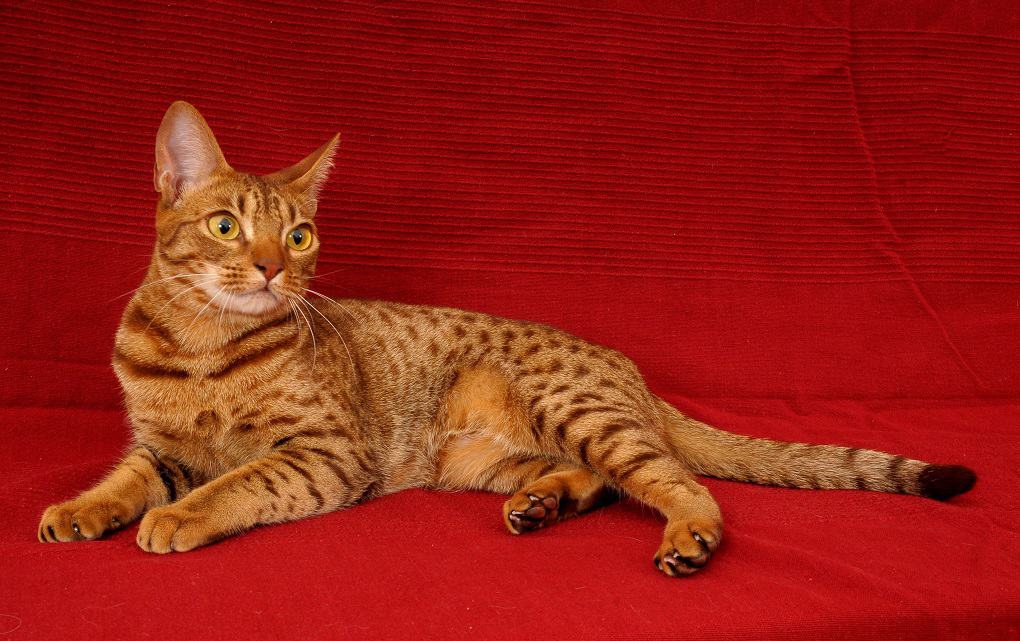 What you want to look for here is that the Ocicat kittens come from a line that is not particularly known for developing any of the health issues which we discussed above. Going to a reputable breeder that can confirm that the parents were healthy is a good start. Other than that, it really just comes down to color and pattern.

Responsibilities to consider in the care of a Ocicat

Just like any other house cat, they need regular grooming, high-quality food, and a lot of cat toys, more so than most other cats.

Yes, the Ocicat does not like to be alone and when you are home, they will follow you around all day long. You have to keep them occupied, or you better believe that they will use anything in your home to occupy themselves. So yes, in terms of attention and the need for company, the Ocicat needs a lot.

Ocicats can be very vocal when they want something, or just when they want to be heard. They are very inquisitive and love to play, they do like to sit in laps and be pet on occasion too. As long as they are around people, they are generally happy, but do remember that they are very active.

The Ocicat is usually always spotted. This cat has what is called an agouti coat, which means that each hair has several bands of color, which gives them a pretty cool look. They can come in 12 different color schemes.

The Ocicat is very affectionate, and as mentioned before, they absolutely do not want to be left alone. They always enjoy being with people, although they do prefer known family members over strangers. They have no problem sitting on shoulders or cuddling in a lap, that is when they are not on the prowl for trouble.

The Ocicat tends to do just fine with kids and dogs. They love attention, so a friendly dog or child makes the perfect companion for the Ocicat.

The Ocicat is known for being one of the smarter and more intelligent cat breeds out there. They love to explore and are very inquisitive, as well, they enjoy puzzle toys and challenges. Being so smart is often what gets them into trouble.

As you may have gathered by now, the Ocicat is a very high-energy cat. They are always on the go, they climb around, get into cupboards, and much more.

Just be sure to put away anything you don’t want them getting their claws on. They need regular grooming, a high-quality diet, and a lot of toys and attention from people. So, they are moderate-high on the maintenance list.

As mentioned in passing above, these cats are usually always spotted, but can come in a variety of colors including lavender, silver, silver-lavender, fawn-silver, blue-silver, cinnamon-silver, ebony-silver, tawny spotted, cinnamon spotted, blue spotted, and a few others too.

As you can see, the Ocicat is definitely a cat breed that will have you paying attention to it. They can be vocal, they want to play, they crave attention, and they do not want to be alone. They are fun cats that will definitely provide for lots of laughs and keep you busy too.