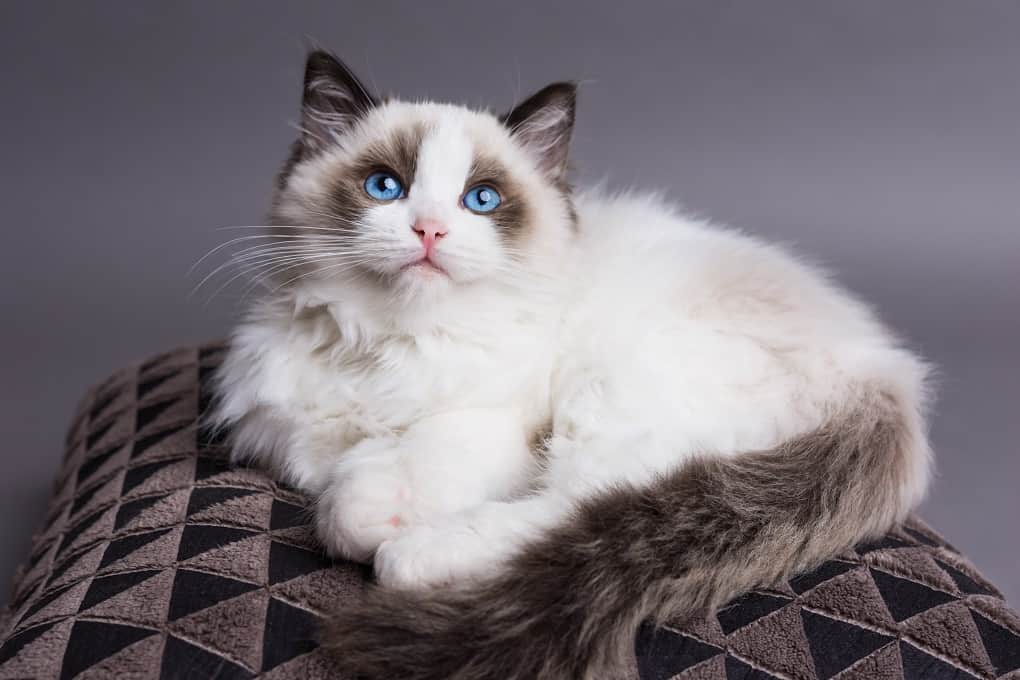 Ragdoll cats are great family pets. Today we want to cover literally everything there is to know about these awesome cats, so let’s get right to it! 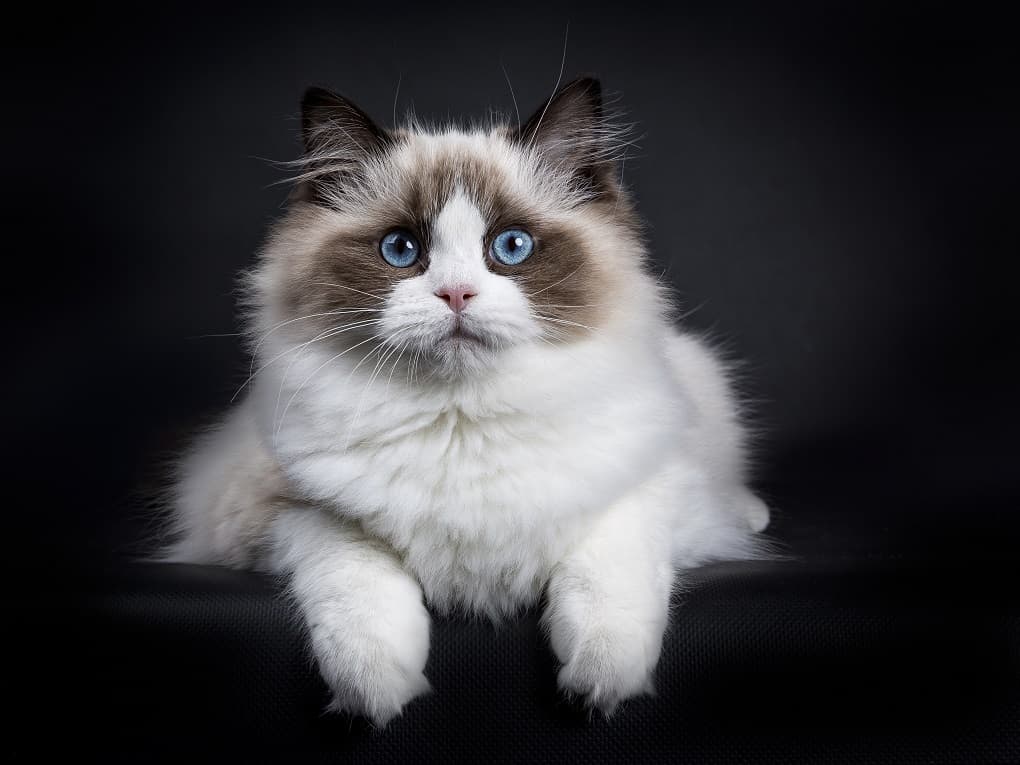 Ragdoll cats are one of those rare cat breeds that are known for being highly affectionate and docile. They are super friendly and are known to lie down in more or less anybody’s lap. They are friendly, docile, affectionate, and they love to be around people.

Ragdoll cats also love to play with humans, toys, and even play fetch. They are one of the more family-friendly cat breeds out there. Overall, they are considered to be a great house pet, one that tends to get along with other house pets, people, and children too.

The Ragdoll cat was first introduced to the world in the 1960s in California. A woman named Ann Baker bred a free-roaming white female cat with medium long hair, with another stray black and white male which had white paws. The children of these 2 cats were what would become the first real Ragdoll cats.

Learn more about Ragdoll cats in this short video below:

It was named the Ragdoll cat as it has tendency to act like a ragdoll when held by people. The Ragdoll cat is now recognized by all major cat associations, and when it comes to popularity, is second behind Bengals.

When it comes to health, Ragdoll cats tend to be quite resilient, but there are a couple of health issues that they are known to suffer from. They have a predisposition to develop feline infectious peritonitis or FIP, they are at risk of developing calcium oxalate bladder stones, and they can also suffer from hypertrophic cardiomyopathy (HCM), which is a form of hereditary heart disease.

Other than that, Ragdolls do not really suffer from other diseases, at least no more than other cat breeds. With that said, one thing which these cats are susceptible to is obesity. However, it is debatable how much of this is hereditary, and how much of it has to do with people not feeding their Ragdoll cats right. Either way, these cats have been known to be a few pounds overweight, so that is something to look out for.

When it comes to grooming, although Ragdoll cats do not have undercoats, they do still need a decent amount of grooming. They may need less than large cats with long fur and thick undercoats, but this does not mean that they do not require any grooming at all. In fact, Ragdoll cats actually love being groomed, both the attention they get and the grooming itself.

You should groom your Ragdoll cat about twice per week to remove dead hair which can cause tangling and matting, using a stainless steel comb. Where the legs meet the body is where you want to be the most thorough, as this is where the most matting occurs.

Something like a rubber curry brush is recommended to use after the stainless steel brush, as it will smoothen things out and remove any remaining loose hairs. Remember that cats that have not been neutered or spayed will have a much thicker coat in the winter, and therefore require more grooming during the winter.

You should also check for bits of feces stuck to the tail, which needs to be removed when found. Furthermore, these cats require a bath every few months, especially when they start to feel stringy or greasy. Just be sure to use cat-friendly shampoo when bathing.

You also want to wipe out their ears about once per week using cotton balls or swabs soaked with some apple cider vinegar. You will need to brush their teeth regularly as well, as they are known to develop dental cat issues, but taking them to a pet dentist works as well.

In terms of height, a male can be up to 66 cm in height, and a female up to 58 cm, so they do actually come at a pretty decent size. They can come in a variety of colorations and patterns, which is something that many people love about them.

The Ragdoll is not the largest of all cats out there, but also not a super small one. Males can weigh around 20 pounds, and females usually weigh between 10 and 15 pounds.

Ragdoll cats come in at a medium on the activity scale. As mentioned before, they love to lounge around with people and just relax on the lap of anybody willing to bare its weight.

However, they do have times where they love to play, run around, play fetch, and mess with cat toys. They are fairly happy cats that like to have fun, but they are not overly active. They make for a good family cat, as they are active enough to be fun, but not so active that they create issues.

To repeat, the Ragdoll cat is not hypoallergenic and may cause issues for people with cat allergies, although people who are only allergic to dander may do fine with them, due to the fact that they do not have an undercoat.

If well groomed, fed, and taken care of, Ragdoll cats tend to be fairly healthy and can live for nearly 20 years. The average lifespan of the Ragdoll cat is around 15 years, but as we noted above, they can get a few years older if well cared for.

In the grand scheme of things, Ragdoll cats are actually fairly easy to care for. Yes, you have to groom them, clean their ears, cut their claws, and give them baths, plus you have to keep the litter box clean and keep them well fed, but other than that, they are pretty average to take care of. Generally speaking, expect to take care of a normal cat when you get a Ragdoll, but no overly special care is needed here.

Where to get a Ragdoll Cat

If you are on the hunt for a Ragdoll cat, you are in luck because there are many certified breeders all across North America. It is highly recommended that you get yours from a certified breeder that will provide you with the proper pedigree papers. Yes, there are also many Ragdoll cats available for adoption in shelters.

How much does a Ragdoll Cat cost?

The average price for a normal Ragdoll cat ranges from $400 to $500 depending on the breeder. However, show cats that come from a lineage of show winners, can cost up to $1,000 per cat. 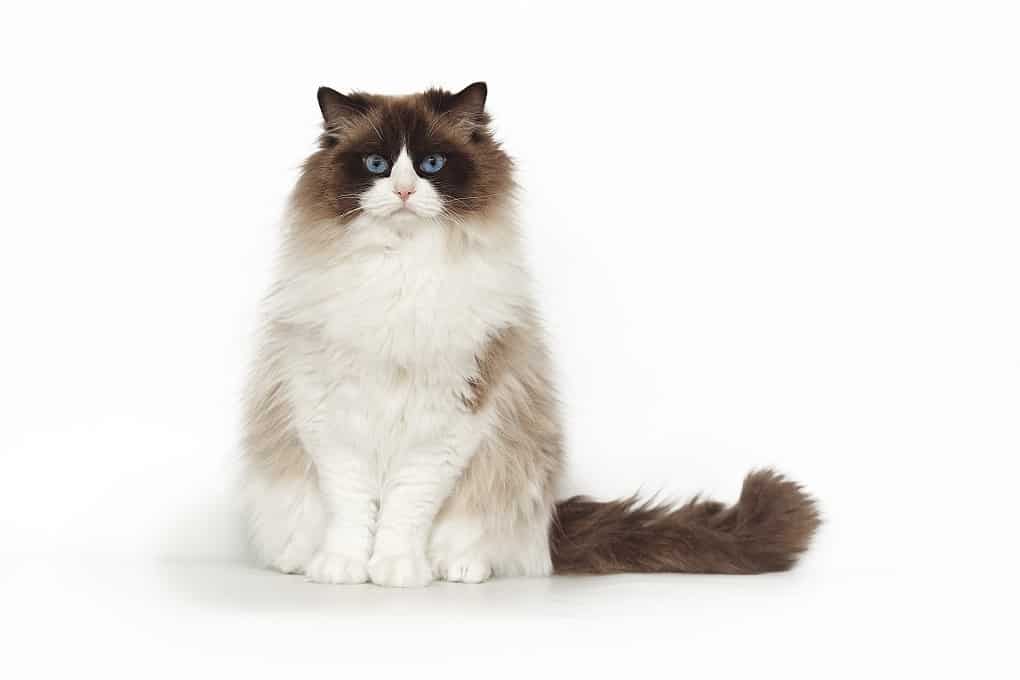 Generally speaking, as long as you get it from a certified breeder, you really cannot go wrong. Choosing the right type of Ragdoll cat is really up to you, as it just comes down to a few types of patterns and colorations. Whichever pattern and color scheme suits you best is what you should go for.

Responsibilities to consider in the care of a Ragdoll Cat

Ragdoll cats really do not require all that much. As we mentioned above, regular grooming, bathing, nail clipping, tooth brushing, and ear cleaning are all things that they require. You should also provide them with a steady and nutritionally balanced diet. Some toys, scratching posts, and cat beds are nice too.

In terms of attention, these cats are very affectionate, and yes, they do like attention from people. They love being with the family and playing with people. In terms of care, just regular grooming and feeding is required.

Ragdoll cats tend to be very relaxed and love to be with people. They are great with other animals, house pets, and children. You will usually find them either lounging around or playing with toys.

Ragdolls can come in 4 pattern types including bi-color, van, mitted, and colorpoint. Choose the one which you like the most.

Ragdoll cats are overly affectionate and absolutely love to be pet, scratched, and played with.

Ragdoll cats do just fine with both dogs and other cats, but of course, your dog might be a different story.

As far as cats go, Ragdolls are said to be of a medium intelligence. They are not lacking in mental capacity by any means, but they won’t give Einstein a run for his money either.

In terms of energy, Ragdolls are pretty laid-back and relaxed. You will experience bursts of energy at times, but generally speaking, they love to lounge around.

General maintenance is very simple with these cats. Regular feeding, some play time, and regular grooming is really all there is to it.

There really are not any other types of Ragdoll cats out there, but the breed itself can come in some variety in terms of colors and patterns.

As mentioned above, Ragdolls come in 4 patterns and these can have 6 colors or color schemes including seal, blue, chocolate, lilac, red, and cream.

In terms of patterns, they can come in bi-color, van, mitted, and colorpoint patterns.

As you can see, when it comes to pet cats, Ragdoll cats are some of the more laid-back, relaxed, and easy-to-care-for animal options out there. They require just normal maintenance, they love to be with people, and they are great around kids.