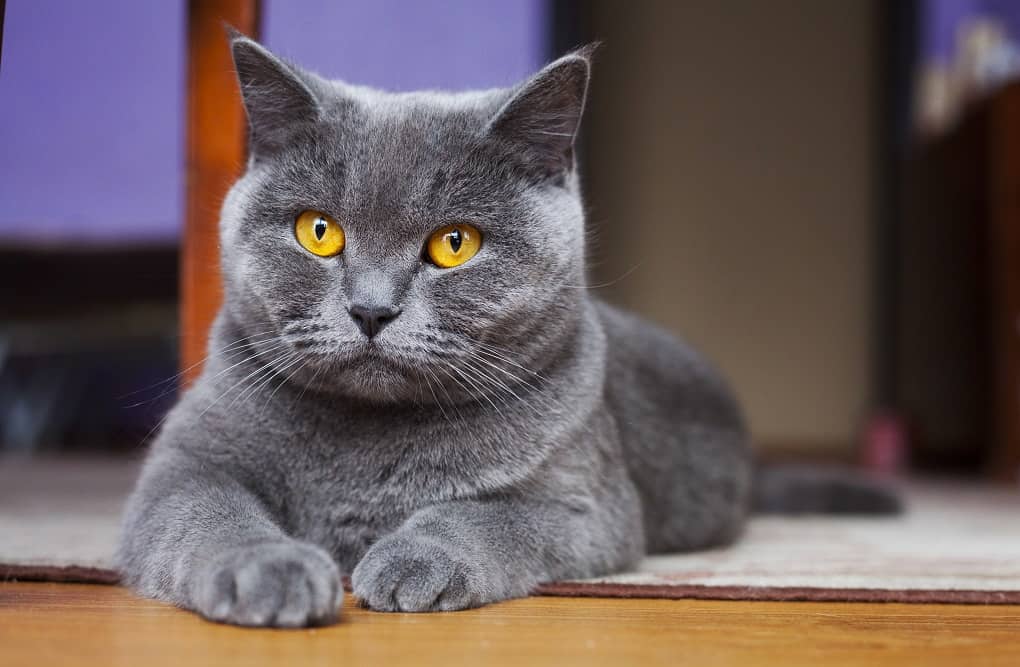 When it comes to upscale or high-end house cats, the British Shorthair is certainly a popular option. Let’s talk about everything there is to know about this breed. 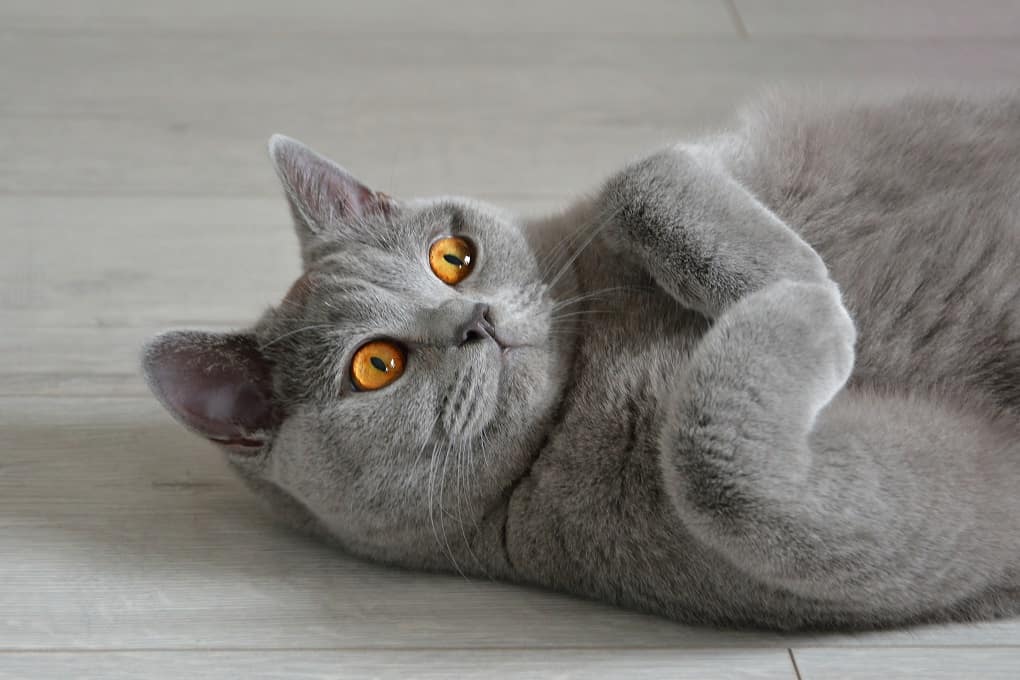 The British Shorthair is a true British cat, friendly, reserved, and easy going. They don’t require a whole lot of attention, but they certainly like being around people. Their overall nature is quite docile and mellow.

They love sitting next to people, although they aren’t fond of being in laps or being picked up. They are not too energetic, they aren’t very destructive, and they are quite mild-mannered as well.

Overall, they are proven to be a great family pet that does just fine around people and kids.

You may not have realized, but the British Shorthair cat is the cat from Puss in Boots and the clever little troublemaker in Alice in Wonderland.

These cats have been around for hundreds of years and were bred as show pets during the Victorian Era. These cats were first bred for the purpose of cat and pet shows, but quickly became beloved house pets.

Here’s a short video of some facts about British Shorthair:

In fact, in the beginning, in the first British cat shows, these British Shorthairs were the only cats of pedigree displayed. What you may not know is that both WWI and WWII totally devastated this breed and there were not many of them left by the late 1940s.

However, due to breeding and proper care, they have made a comeback and are now very numerous once again.

Overall, British Shorthair cats are quite healthy. As long as they get a moderate amount of exercise, are fed a proper diet, and live in a clean environment, they should be perfectly healthy. Besides a few things that can affect all domesticated cats, they don’t have many known health issues.

One thing to look for however is their teeth, as they are known for developing gingivitis if their teeth are not cared for. They are also known to develop hypertrophic cardiomyopathy, but this is a heart condition that can affect any breed of cat. In rare occasions, British Shorthair cats can also be bleeders, or in other words, they have been known to suffer from hemophilia, although this is quite rate.

One thing which many people love about the British Shorthair cat is that it is relatively easy to groom. They have short and stalky fur, as the name might imply. Therefore, you only need a basic comb or stainless steel pet brush to groom them.

They only need to be groomed about once per week. Thankfully, their hair is short, and therefore they don’t matt or get tangled. Unless they roll in something rank, they also do not require regular bathing.

A once yearly bath, or maybe twice per year, is more than fine for the British Shorthair cat. The fact that they have short hair makes them really easy to groom, and means that they require minimal grooming maintenance.

Of course, you do have to care for their ears, claws, and teeth as well, all things we will get to a bit later on.

In terms of height and size, British Shorthair cats are not overly large; they are pretty medium when it comes to the size department. A full-grown British Shorthair can reach around 14 inches at its shoulders, which is pretty average for a house cat.

Males are known to be slightly larger than females. These cats tend to have a fairly wide body with a stalky chest and wide ribcage. They have thick tails, strong legs, and are considered to be a bit boxier than other cats. They are not particularly long or slender.

British Shorthairs are not overly active, but they are not lethargic either. They tend to be quite active and energetic as kittens, and they love to roam around, play with toys, and chew on anything and everything.

However, as they mature and grow older, they usually calm down quite a bit. Mature British Shorthairs can be couch potatoes, especially females, but makes do have a tendency to be a bit goofy and happy-go-lucky in nature.

No, unfortunately for anybody with allergies, British Shorthairs are absolutely not hypoallergenic. In fact, they are some of the least allergy-friendly cats out there.

They have very thick fur that gets everywhere in your home. Yes, regular grooming will help cut down on loose hair and dander, but this will only go so far.

The average lifespan of the British Shorthair can is anywhere from 14 to 20 years. However, this is the absolute maximum, and in the home, they can live for as little as 12 years.

The data here is somewhat inconclusive, as they appear to have a wide range in terms of their possible lifespan. You should expect 11 years at the least, and 20 years at the very most.

In terms of caring difficulty, the British Shorthair is fairly easy to care for. They don’t have too much energy, but getting them a few toys and a scratching post is still recommended.

They don’t require much in terms of grooming, as their hair is short and does not tangle easily. You do need to brush their teeth regularly, or bring them to a pet dentist, as they are known for developing gingivitis.

Other than that, they are easy to care for, as you only have to worry about clipping their nails about once per month, and you need to clean out their ears every couple of weeks with a cotton swab. Besides regular and healthy meals, there’s not much else in the way of caring difficulty.

Simply put, they are easy to care for.

Where to get a British Shorthair

British Shorthair cats, while they used to be quite rare, can be found in many places now. Many breeders are of course in the UK, but there are many spread across the world, with many being in North America.

It is of course recommended that you get a certified British Shorthair with pedigree papers. There are also many available for adoption in pet shelters.

How much does a British Shorthair cost?

British Shorthairs are some of the rarer housecats out there, due to WWI and WWII, so they are not cheap. Your average British Shorthair will cost you as much as $1,500 per kitten, or up to $2,000 in some cases.

Kittens coming from a distinguished lineage may cost as much as $3,000 per kitten. 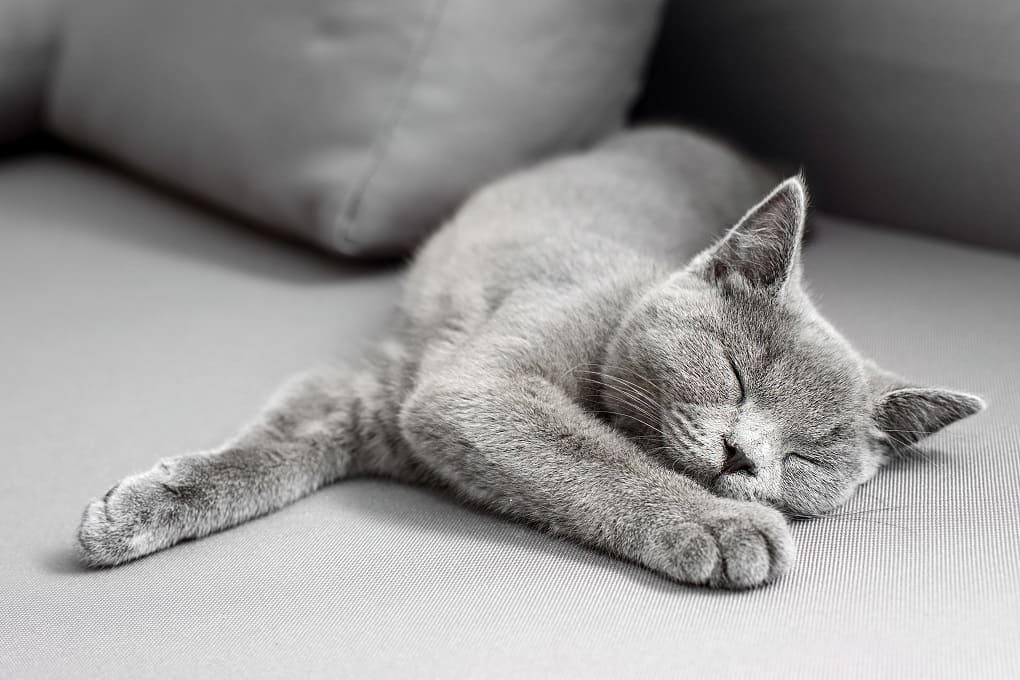 In terms of choosing the right one for you, besides their personality, there is really not much to consider here. It really comes down to getting your cat from a reliable breeder, one with pedigree papers.

Furthermore, the other deciding factor here is going to be the color and pattern. As long as you get the one with the pattern and coloration that you like most, there’s really not much else to consider.

Responsibilities to consider in the care of a British Shorthair

When it comes to keeping a British Shorthair, there are not too many things to keep in mind here. For one, get them checked for those health issue we mentioned above, and don’t overfeed them as they can get chubby.

Other than that, basic grooming, dental hygiene, and claw care are the only things they require. Some toys, a soft bed, and a scratching post are good additions too.

As all cats, they really require minimal care and attention. Generally speaking, as long as they are around people, they tend to be pretty happy. Good food, some toys, and some belly rubs are about it. 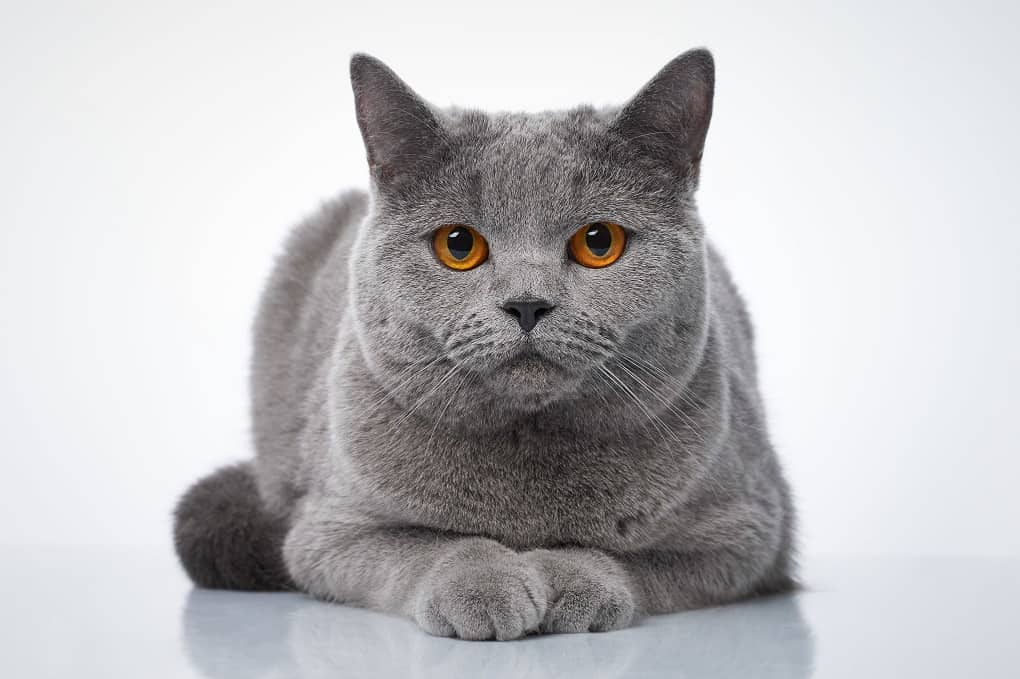 In terms of behavior, they are very mellow, laid-back, and relaxed. They are not big on destroying furniture or being aggressive to others. They like to play on occasion, but are not very high energy when fully grown.

The British Shorthair can come in a variety of patterns including solid color, tortoiseshell, bi-color, tricolor/Calico, tabby, smoke, and shaded.

British Shorthairs are not overly affectionate. They like to be around people and they like to play. However, they don’t like being picked up very much, and they aren’t big on sitting in laps.

Yes, these cats are mellow and friendly. They do alright with dogs, but for the most part, it’s the cat that has to worry about the dog. They do just fine with kids as well.

British Shorthairs tend to be fairly intelligent and easily trained. As far as cats go, they are usually considered to be quite smart.

Adult British Shorthairs are not particularly energetic, even being referred to as couch potatoes. Males can be a bit goofy at times, but when fully grown, most are calm and relaxed.

As mentioned above, there is not much besides a bit of grooming, feeding, and regular litter box changing that goes into maintaining one of these cats.

Besides different colors and patterns, there are at this time no breed variations.

As you can see, these cats are quite relaxed and mellow, have minimal health concerns, are friendly with most people, and they don’t require much care or too much attention. Although a bit pricey, they do make for great house pets.