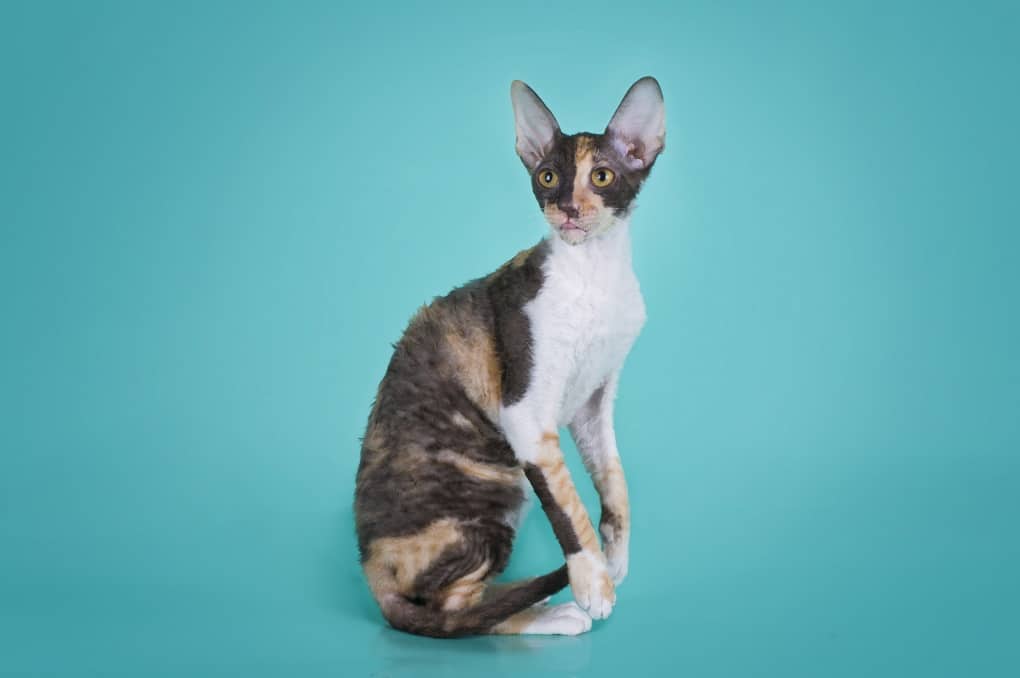 If you are looking to get a pet cat, there are of course lots of choices to keep in mind. A favorite for many people is the Cornish Rex. Let’s go over everything you need to know about the Cornish Rex.

The Cornish Rex tends to be a very kitten-like cat, which means that it loves to play, and it will keep this youthful nature well into its old age.

It’s actually one of those cats that is said to be somewhat dog-like as well, as they have a proclivity for retrieval of balls and toys which are thrown for them. Additionally, these cats are known to be fairly intelligent.

Find out more about Cornish Rex in this short video below:

They like to figure out puzzles, and they can use their long toes to easily manipulate a variety of objects, such as cabinet doors for instance. They are also very quick on their feet. Furthermore, the Cornish Rex is very affectionate and they love to be handled.

Cornish Rexes tend to be somewhat vocal as well, and don’t make the best choice for somebody who likes their peace and quiet. 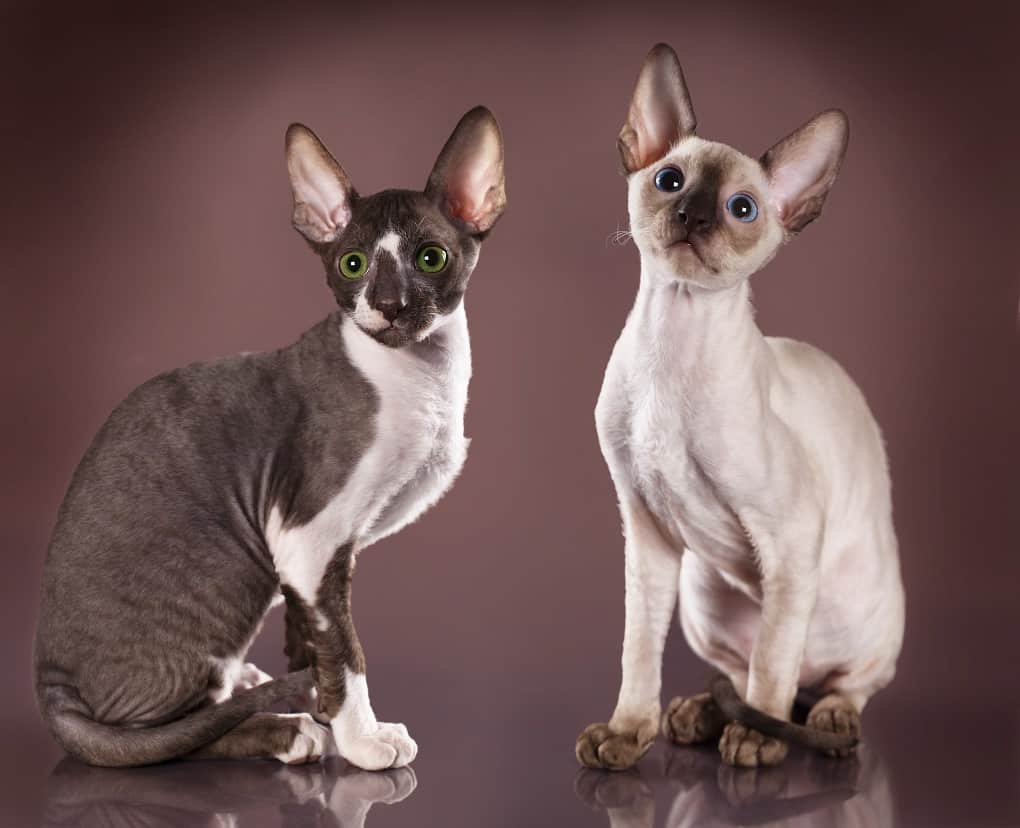 The Cornish Rex has its origins in Cornwall, England, hence its name. The Cornish Rex actually has a curly coat, which is due to the fact that the first recognized of the breed was born of a female short-haired tortoiseshell/white pet cat by the name of Serena, as well as a male ginger shorthaired tabby.

This was only back in 1950, making this breed of cat a fairly new addition. This was not intentional and was in fact a sort of genetic mutation which then resulted in the Cornish Rex.

The owner of the white female shorthaired cat went about breeding the newfound Cornish Rex and was somewhat successful in officially developing this breed of cat. The offspring made their way to the US, where they were continued to be bred by a variety of people.

The same was done with other offspring in East Germany. In the US, the Cornish Rex was officially recognized in 1963.

Some could easily confuse this cat with the Devon Rex as it has the same physical characteristics.

In terms of health, the Cornish Rex tends to be moderately healthy. It does not have too many health issues to speak of, but there are some which this breed of cat is prone to.

One of these health issues which the Cornish Rex can suffer from is hypertrophic cardiomyopathy, which is something that many other cat breeds also suffer from.

However, other than these few issues, the Cornish Rex tends to be a fairly healthy cat breed.

One great feature of the Cornish Rex is that this type of cat is very easy to groom. These cats have very short and fine hair which do not require much brushing.

You can use a very soft and fine brush, maybe once a month, just to remove some old and dead hair. There are some with slightly longer and thicker hair, but these still only require occasional brushing. Moreover, the Cornish Rex barely requires any bathing, and it is not very good for their coats.

However, there are some Cornish Rexes that have a lot of white on them, and may require occasional baths to prevent them from looking dingy and dirty.

You will also want to keep good care of their claws, and when it comes to their ears, wiping them out every now and then with a thick cotton ball and warm water is recommended.

You will also want to brush their teeth on a regular basis, as these cats may develop periodontal diseases if oral health is not well looked after.

They also tend to have relatively small heads when compared to the rest of their bodies, with very large ears.

Although the Cornish Rex appears to be a very large cat in stature, in terms of weight, this cat breed tends to be one of the lighter out there. Males typically weigh up to 10 pounds, with females weighing as little as 6 or 8 pounds. They are certainly not very heavy at all.

The Cornish Rex is a very active cat. They will follow you around the home all day long, they might make some music on the piano, they love to jump up as high as your home will allow, and much more.

These are very energetic cats that love to play with toys and humans alike. They will chase balls, explore your cabinets, and so much more. You definitely won’t ever be bored if you have a Cornish Rex.

The Cornish Rex is not a particularly long-lived cat, at least not when compared to some other breeds. The average lifespan for this cat breed is between 11 and 15 years, with 13 years being the median.

The Cornish Rex is not all that hard to care for. In terms of grooming, they really do not need too much of it. Some brushing, ear cleaning, and claw care is really all there is to it.

Of course, feed them a good diet and keep their litter boxes clean at all times. They do however require a lot of attention from people, so there is that to keep in mind.

Where to get a Cornish Rex

When looking to purchase a Cornish Rex, you should always go to a certified breeder that can provide you with the proper papers and family lineage information.

There are breeders in Europe and North America, as well as a select few spread out across the rest of the world.

How much does a Cornish Rex cost?

In terms of cost, the Cornish Rex is not a super expensive cat, but with that said, still expect to pay between $800 and $1,300 for a single kitten.

Normal kittens will cost less, but show cats and those coming from distinct lineages may cost up to $1,300 or even more. 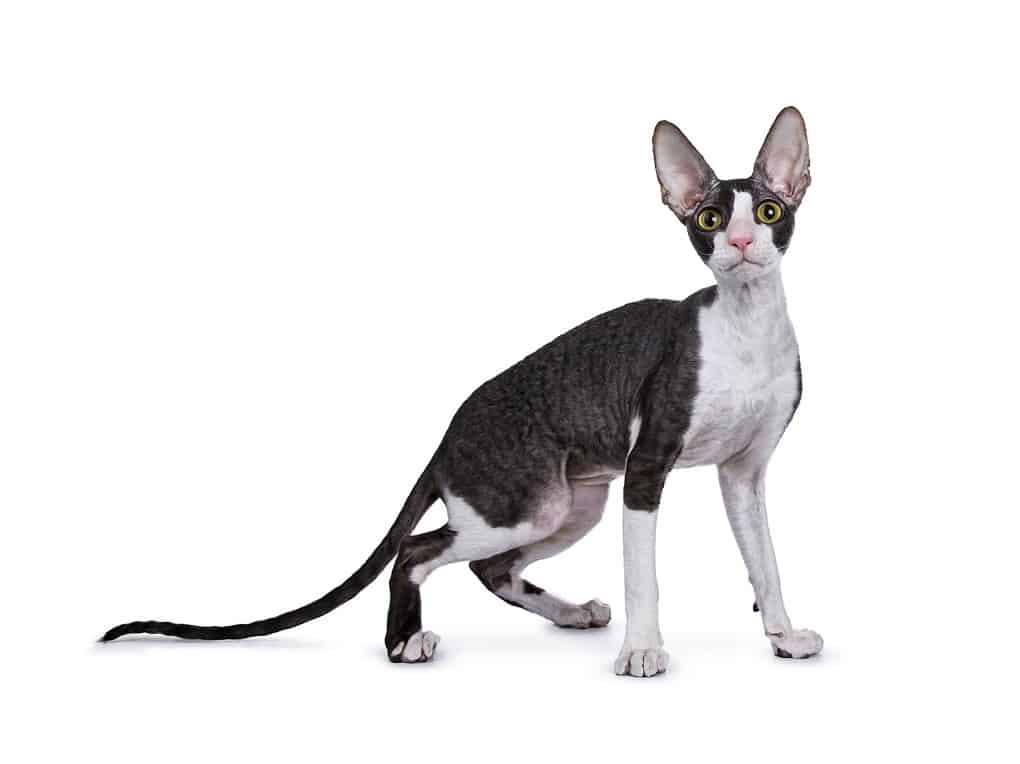 Choosing the right type really comes down to what kind of color and personality you want. Looking at the parents is a good way to start.

Just keep in mind to always go to a certified breeder and inquire in terms of family health history. As long as you get one that is healthy and has the coloration you like, there’s not too much else to consider.

Responsibilities to consider in the care of a Cornish Rex

Besides food and occasional grooming, the only thing the Cornish Rex needs is a lot of attention and play toys.

These are active, friendly, social, and attention-seeking cats. They love to play, to be active and to explore, and to be handled, pet, and scratched by people.

They may get vocal if unhappy, but this is rare. They are not particularly destructive, but they do like to get into everything, as they are curious.

The Cornish Rex can come in a variety of patterns including solid colors, bicolor, tricolor, tortoiseshell, ticking, tabby, points, smoke, and shaded.

Yes, this is one of those cat breeds that is super affectionate, more than most others out there. They like to be handled, they don’t mind being picked up, and they love a good scratch behind the ears. This is definitely a people cat.

Yes, they are about as friendly with dogs and kids as most others. They do perfectly fine with kids and dogs, as long as they are treated with respect.

Although not known for being the Einstein of the cat world, the Cornish Rex is known to be fairly intelligent. They certainly are curious and explorative.

The Cornish Rex does have quite a bit of energy. They are often on the move, playing, and exploring things. It’s a not a cat for somebody who likes to lounge around all day long.

Besides moderate grooming, ear cleaning, and claw care, and a whole lot of play and attention, these cats do not need too much maintenance.

There are other types of “Rex” cats out there, but in terms of the Cornish Rex, it is the only one. However, these cats come in many colors and patterns.

The Cornish Rex can come in a variety of patterns including solid colors, bicolor, tricolor, tortoiseshell, ticking, tabby, points, smoke, and shaded.

The Cornish Rex is great family cat that does fine with kids and dogs, they are active and love to play, they adore getting a ton of attention, and are not too hard to maintain either.