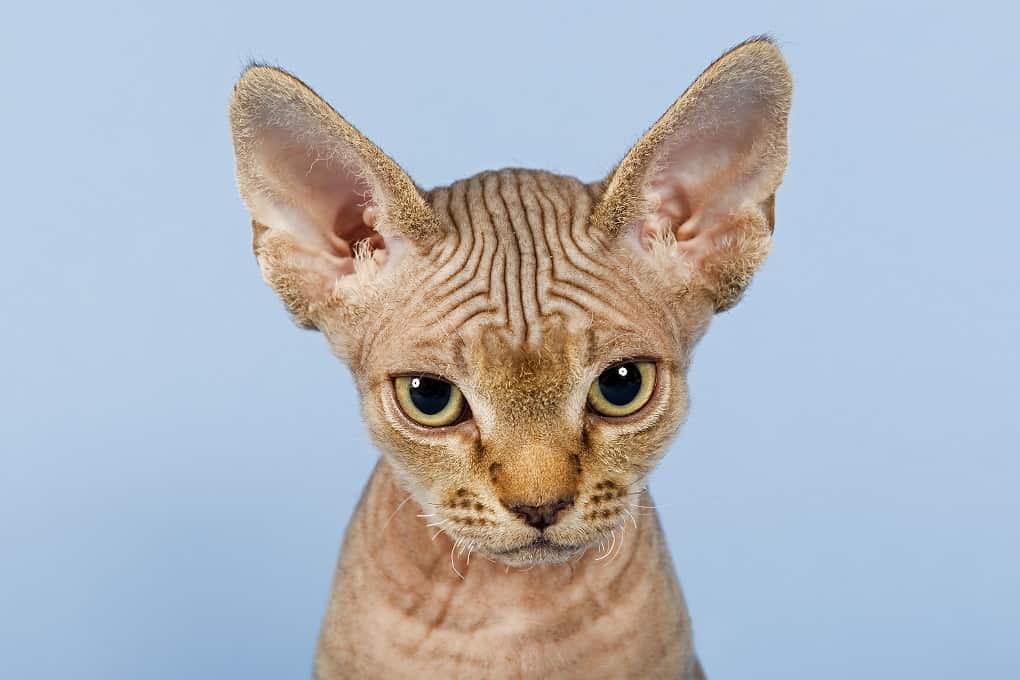 If you are looking for a pet cat, you might consider getting a Devon Rex. Before you go out and buy one, you should find out everything there is to know about them, which is what we are here.

When it comes to wanting human attention, playing, and much more, the Devon Rex makes for a great pet cat. These cats absolutely love to be with people; they want to be scratched, they want to sit on laps, and they even love to perch on the shoulders of people.

They hate being left out of anything and they do not like being alone. It’s not a type of cat to get if you don’t plan on giving it a whole lot of attention.

Check the video below for quick but informative facts about Devon Rex:

When you are home, these cats will follow you around. These cats are known for being very playful, inquisitive, and smart, and they love playing with puzzle toys that will provide them with an intellectual challenge.

These cats even love to sit at the dining room table at mealtimes, and they love to eat. They can actually get quite fat because they’ll just keep snacking. The Devon Rex is a bit mischievous, they are agile, and they love to jump and get into things all day long.

Devon Rex cats were first identified in 1959. It was actually thought to be a type of Cornish Rex, but it was soon discovered that this was not so.

As the name of the cat suggests, it originally hails from Devon, England. Unfortunately, there is virtually nothing known about the ancestry or parents of the first Devon Rex, named Kirlee.

It is thought that the mother was a stray, as was the father, and it is more or less totally unknown what either of the parents really looked like. Around 1968, the Devon Rex made its way to the US, and in 1979 was officially recognized as a cat breed by the Cat Fanciers Association.

It is also a very close relative with the Cornish Rex with many similar qualities and characteristics. 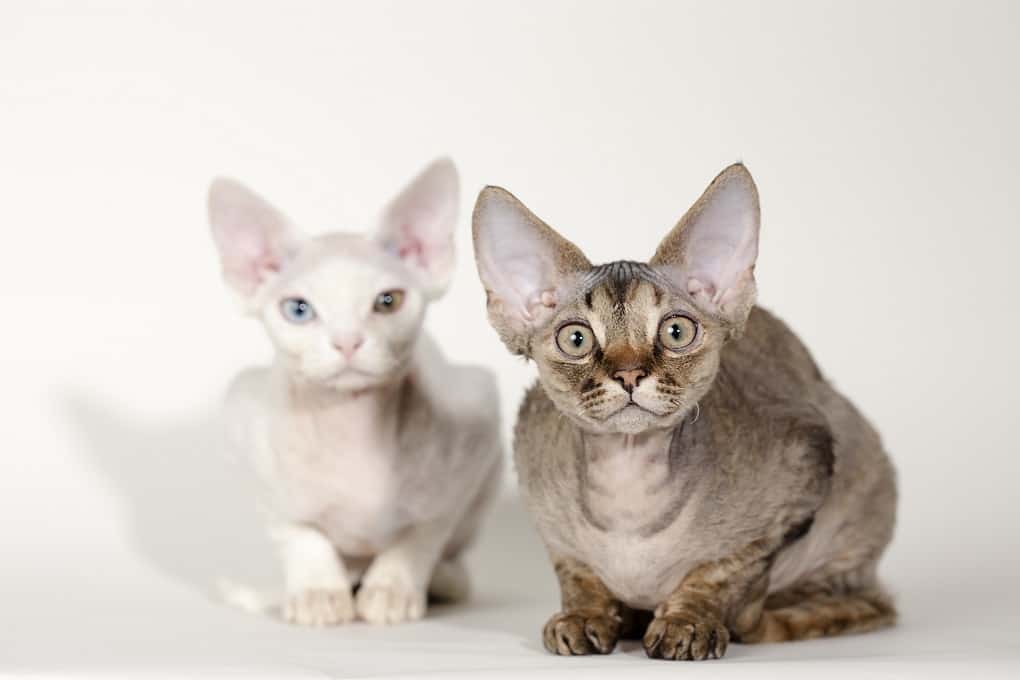 While this is not life-threatening, it does cause skin issues and grooming challenges. Next, this cat may also develop hypertrophic cardiomyopathy, a fairly serious type of heart disease.

Furthermore, the Devon Rex often develops something called Malassezia dermatitis, which is a type of yeast that can cause itchiness, greasy skin, and ear infections.

This cat may also be born with hip dysplasia, which is a malformation of the hip socket. Urticaria pigmentosa is another problem they can suffer from, which causes itchy and rash like sores on their body.

Finally, another thing which they might be born with is spasticity, which is a general weakness of the muscles which causes them to tire easily. This can remain stable or get worse over time.

When it comes to grooming, the Devon Rex does not require much of it. They have soft, fine, and short coats, which means that they only require minimal grooming.

Some occasional brushing with a soft brush is more than enough. In many cases, you can actually just brush your hands over their coats.

They also do not require regular baths; once every 5 or 6 months is more than enough. You will only want to bathe them if they get really stinky or dingy, because baths are not too good for their coats.

You may also want to wipe out their ears with warm water and cotton balls once every few weeks, and general claw care is required as well.

These cats tend to be quite long and slender, as well as slightly muscular and toned, but not wide or boxy. These cats are known for having massive ears as well.

The Devon Rex is not a very heavy cat breed either. The biggest of males will usually grow to a maximum of 10 pounds heavy, with smaller specimen growing to as little as 8 pounds. They certainly are lightweights.

In terms of activeness, the Devon Rex is moderate-high. It is not the most active cat in the world, and is not always on the move. However, with that being said, there are times when this cat loves to jump around, get on top of things, explore, and find out what’s in those kitchen cabinets.

They will follow you around a lot and they love attention and activities, especially with humans. They like playing with toys as well, especially ones that pose some kind of puzzle or challenge.

The Devon Rex is not a hypoallergenic cat. You may think that this is a good cat for allergy sufferers due to its short hair, but it is actually the dander and dead skin which causes allergic reactions. So, no, they are not the best option to go with for people who have cat allergies.

As mentioned before, the Devon Rex does have several diseases and health issues which it is prone to. Therefore, they do not have the longest lifespans of cat breeds.

Generally speaking, they will live to an age of 9 to 13 years, which is relatively short as far as cats are concerned.

The Devon Rex is not overly difficult to care for. Yes, they do love to play and get attention, but in terms of grooming, cleaning, and feeding, they are not overly demanding at all. They are of an easy-moderate care difficulty.

Where to get a Devon Rex

There are quite a few breeders at this time, and we would recommend going to a legit breeder.

Yes, you can find them in shelters, but due to their numerous health concerns, if you cannot find out about lineage and the health issues of the parent cats, it is not recommended to adopt one.

There are more than enough breeders out there.

How much does a Devon Rex cost?

The Devon Rex is not the most expensive cat in the world, and as far as pure breeds go, is actually quite inexpensive when compared to other cat breeds.

You can expect to pay around $600 for a Devon Rex kitten, or up to $800 if it comes from a distinguished line.

Yes, of course you should get a Devon Rex with the pattern and colors you like, but the main thing to keep in mind when choosing one is their health concerns. You want to inquire about family lineage and possible health concerns.

Going to a breeder that has managed to have lots of healthy kittens in the past is very important. You may also want to inquire about the energy levels and friendliness of the parent cats, but the kittens may not follow in terms of these traits.

Responsibilities to consider in the care of a Devon Rex

You will need to get them vaccinated and keep up with regular vet visits to combat any of the possible health issues which they may have or develop.

Other than that, they need minimal grooming, a good diet, and lots of human attention. There’s not too much else besides the fact that they like their litter boxes to be kept super clean.

Yes, the Devon Rex needs a whole lot of attention. They do not like to be alone, not even in a different room.

They want to play, be picked up, and just be with their human companions in general. They need lots of attention and a decent amount of care too. 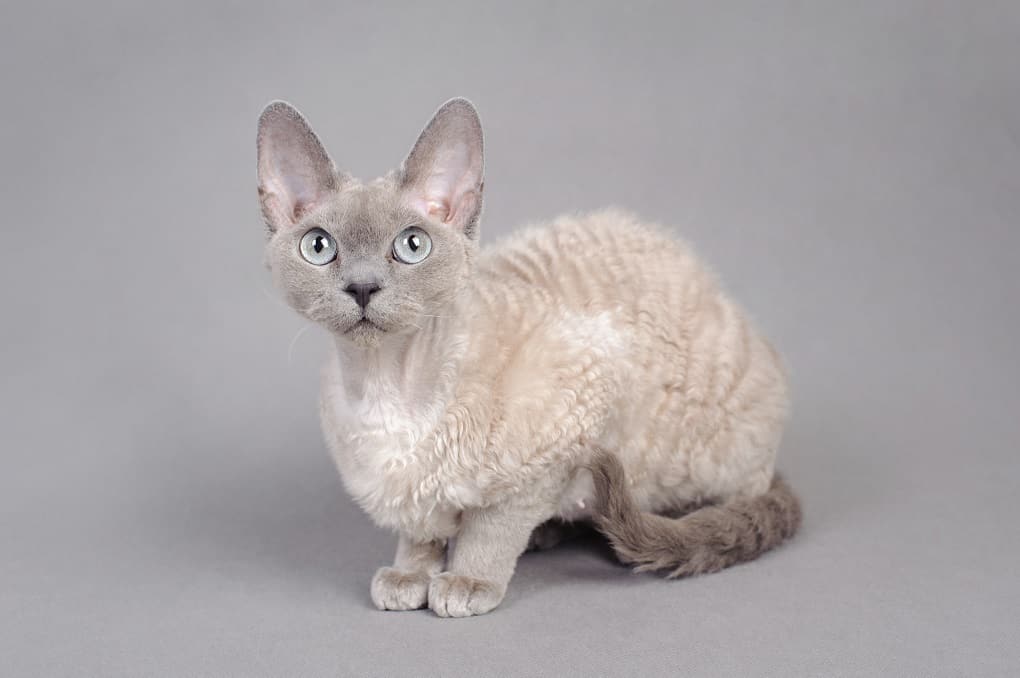 As mentioned before, the Devon Rex is playful and inquisitive, and quite intelligent too. They have a soft voice which they may use to communicate or display displeasure.

They are fine with people and pets, they like to play, and are quite curious too, although not overly active.

The Devon Rex is a very affectionate cat. They always want to be with their humans, they like to play, they love to be pet, and they like to sit on laps as well.

The Devon Rex does fine with children and dogs. They love attention from children, and as long as dogs don’t harass them endlessly, they do fine with canines too.

The Devon Rex is known for being a fairly smart cat. No, it’s no genius, but it does have a proclivity to explore places, it can easily get into cabinets, and it doesn’t mind the occasional challenge or puzzle toy.

In terms of energy, the Devon Rex is moderate-high. It is not always on the move, but often so. Morose than energy, they just want affection, but with that said, they certainly are not sluggish.

In terms of grooming, feeding, and general care, they are not too high maintenance. However, due to their multitude of possible health concerns, you will need to get them checked by the vet quite regularly.

There are a few other types of Rex cats out there, but there is only one Devon Rex type.

These cats are fun loving, affectionate, and inquisitive. Besides their health issues, they tend to be easy to care for, but they do need lots of attention and attention from their owners.