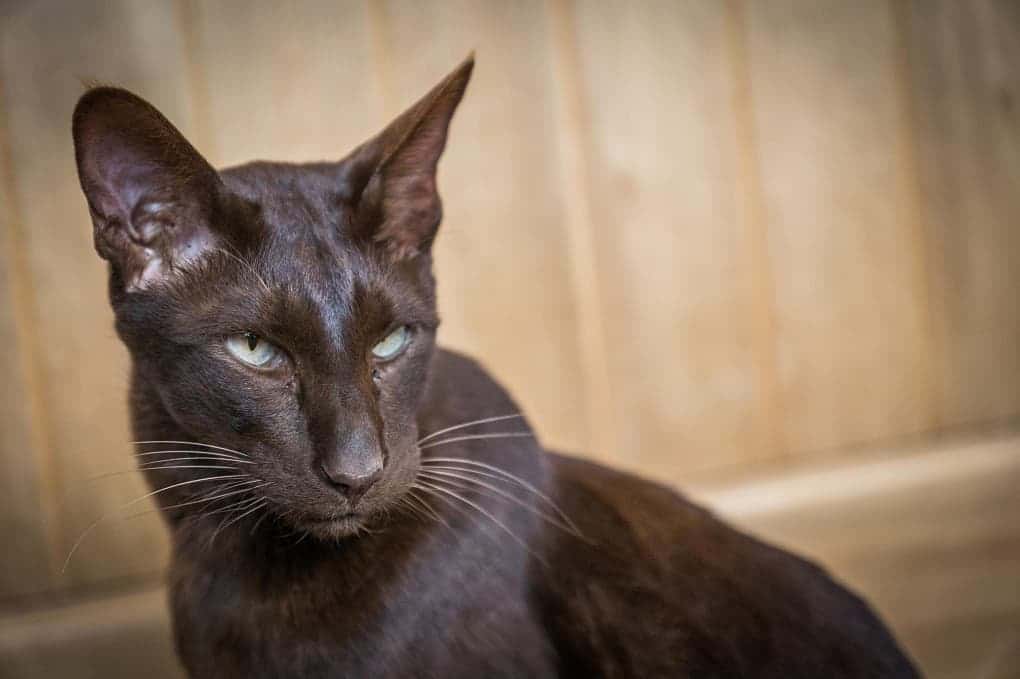 If you are thinking of getting a Havana Brown cat, you need to know what kind of personality it has, how to care for it, and more. Let’s find out what you need to know about this cat breed.

The Havana Brown is a very friendly and outgoing cat when it comes to their owners. They do really love their owners, and they will follow them around the house.

Now, this only goes so far, as the Havana Brown is known for bonding with 1 or 2 people in particular, and it forges a very close bond with these few people, but may not be overly open to other people, even kids and pets. They are not big fans of strangers.

While they do forge close bonds with a select few people, as long as they have toys, they do not mind being alone for a little while. They are known to be fairly intelligent cats that like playing with teaser and puzzle toys.

The Havana Brown has a pretty unclear and muddled history, at least before the late 1800s. These cats have their origins in many countries around the world, and were bred from Southeast Asian Siamese cats, black British Shorthair cats, and Russian Blues.

For a very long time, and to some point still today, they are known as Swiss mountain cats, although they have absolutely nothing to do with the mountains of Switzerland.

There were brown Siamese cats in Thailand in the 1890s, but for some reason people did not like their eyes and lost interest in them until the 1950s, when these brown Siamese cats were crossbred with Russian Blue cats and domestic black British Shorthair cats. The result was a chocolate brown kitten, which is now known as the Havana Brown.

Shortly after, these kittens were exported to the US and bred further, resulting in the American Havana Brown having a different head and body type than its British counterpart.

The Havana Brown is actually a very rare cat now, to the point where its genetic makeup is being threatened and there is the real possibility that it may be bred out of existence. 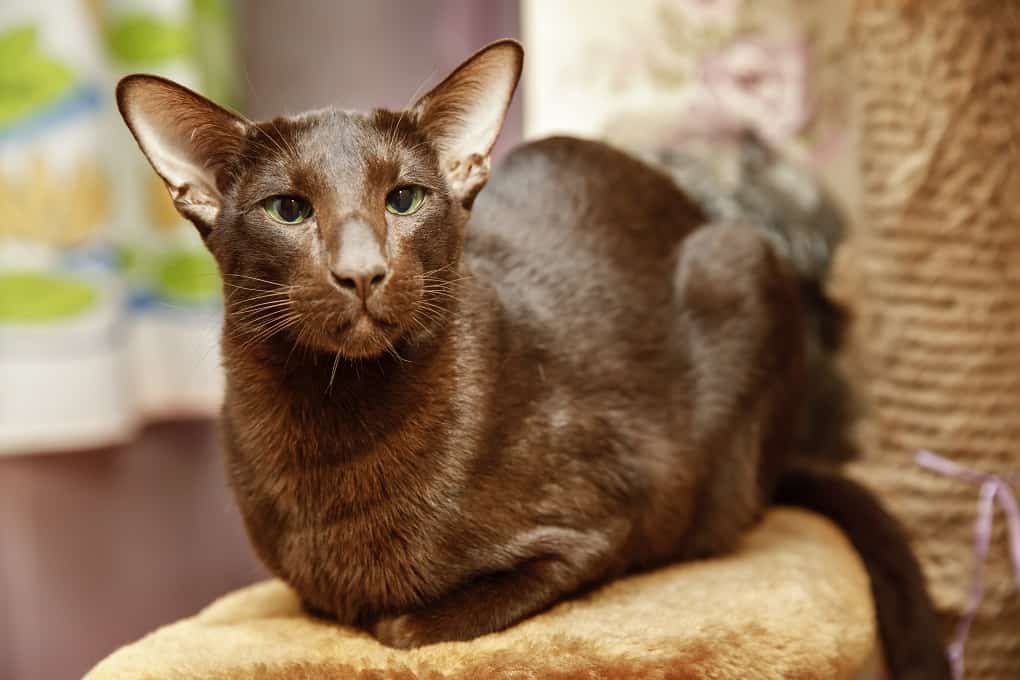 The Havana Brown tends to be a fairly healthy cat that does not suffer from any genetic or hereditary conditions, at least not very serious ones. However, the Havana Brown is known for developing upper respiratory infections, especially during the cold weather.

Moreover, you need to watch what you feed them, as they are prone to getting obese as they are known for overeating. Other than that, besides other feline-related illnesses that are common, not just among this one breed, there is not much else to look out for. All in all, the Havana Brown is usually quite a healthy cat.

The Havana Brown has a very slick and smooth coat; they have fairly short hair and not too much of an undercoat. Unless it is a transition period in the year – spring time – they also won’t shed too much.

Therefore, when it comes to grooming the Havana Brown, using a very soft brush or chamois once per week to polish them and to remove dead hair and skin, is about as far as you will have to go. Keep in mind that you should not really bathe the Havana Brown much, once or twice per year at most, as bathing will dry out their skin.

You will also want to brush their teeth a few times per week, as they may develop periodontal disease if not well cared for. Furthermore, you will want to use a warm water soaked cloth to wipe residue and discharge from their eyes at least once a week.

On that same note, using a cotton ball soaked in a 50/50 mixture of warm water and cider vinegar to clean out their ears once per week is recommended as well. Moreover, you will also want to clip their claws about once per month, depending on how well your Havana Brown utilizes its scratching post.

The Havana Brown is a very unique looking cat, as it has a very triangular face, one with a square and developed chin. This makes the snout look kind of like a corn cob; it has quite a long and distinguished snout. They tend to be fairly muscular and slender, and of a medium size. Generally speaking, they usually will never grow to over 10 inches at the shoulders.

The Havana Brown is not an overly large cat and will usually weigh no more than 10 pounds, which is the maximum for males. Smaller specimens and females will often weigh as little as 6 or 8 pounds.

The Havana Brown is about a 5 or 6 out of 10 on the energy scale. They like to play with toys, and they have no problem playing with toys on their own. While they will often follow owners around the home, they still have a laid back nature. They often enjoy lounging around. The Havana Brown may require a lot of attention from its owner, but it is not overly active.

The Havana Brown is not hypoallergenic, as technically no cats are. However, they do have fairly short coats and don’t shed too much for most of the year, so they are not the worst possible cat to have if you suffer from allergies.

If well cared for, the Havana Brown can live for up to 15 years. The average lifespan for this cat is between 10 and 15 years, with the usual maximum age being somewhere around 12 or 13 years of age.

The Havana Brown is not overly difficult to care for. They will want to be around people, and will follow you around the home, possibly vocalizing and demanding things from you, but they can also be loners at times and be fine playing on their own, but still around people.

They can be somewhat odd cats, but in terms of grooming and feeding, they are nothing too difficult, but be sure to not feed them too much, as they can easily get fat.

Where to get a Havana Brown

The Havana Brown is a fairly rare cat, so it might be difficult to find a breeder, and also a breeder that has a litter of kittens ready. It is always recommended that you go to a reputable breeder.

How much does a Havana Brown Cat cost?

When it comes to colors and patterns, the Havana Brown really only comes in the chocolate variety, so there is not much to think about there. Once again, you should go to a reputable breeder that can confirm health issues and family lineage in relation to health.

Responsibilities to consider in the care of a Havana Brown Cat

The Havana Brown requires a nutritionally balanced diet, moderate to little grooming, a lot of attention from people, and a fair amount of play. Other than that, it is really just basic cat care.

The Havana Brown needs a fair amount of attention from people, but not always. They do fine just being around people, but do not necessarily need to interact with them at all times. 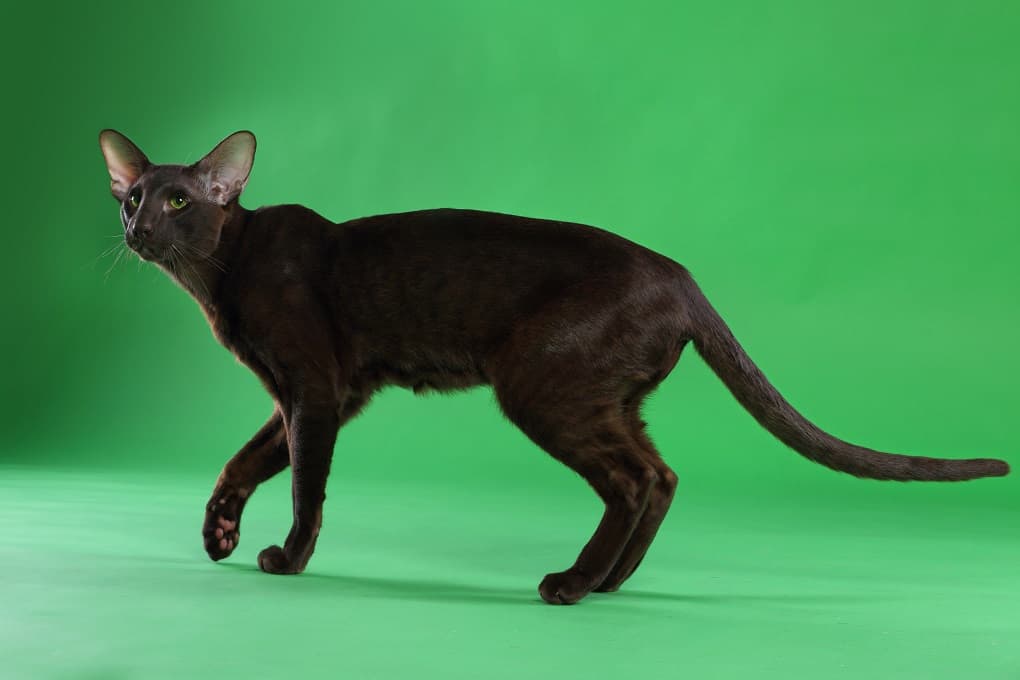 It is really kind of up in the wind, as this breed can be very diverse. Some always want to be around people, but in many cases, while they enjoy company, they can also be loners in the sense that they can play with toys on their own and be totally fine. They often get very close with a single person and don’t overly enjoy strangers.

A real Havana Brown comes in one pattern, which is a solid color, and ideally they should be chocolate or brown, but can also have hints of lilac in their coats.

The Havana Brown is affectionate as far as their favorite people go, which is usually limited to 1 or 2 people at the most. However, they do not enjoy strangers and can at times be loners.

The Havana Brown is friendly enough with kids and dogs. It’s not like they will have problems with each other, but the Havana Brown may just choose to stay away from them.

While the Havana Brown usually does not turn on taps and get into cupboards, it does not mind teaser and puzzle toys. They are known to be moderately intelligent.

The Havana Brown is not an overly energetic cat. It does not like being alone, but it’s not one of those cats that is always bouncing off the walls.

Besides giving it a good deal of attention, making sure it does not overeat, and regular grooming, the Havana Brown not an overly high-maintenance cat.

As mentioned above, the Havana Brown comes in one pattern, which is a solid color, and ideally they should be chocolate or brown, but can also have hints of lilac in their coats.

The Havana Brown makes for a good cat for single people and couples who are home a lot. They will get along fine with kids and larger families, but may just not interact with all family members too much. They are fairly easy-going cats and are not too bad in terms of maintenance.